Venezuela's special police forces (FAES) killed 29 inmates in what the authorities described as a failed escape attempt from a detention center. Activists reject the official version of events. 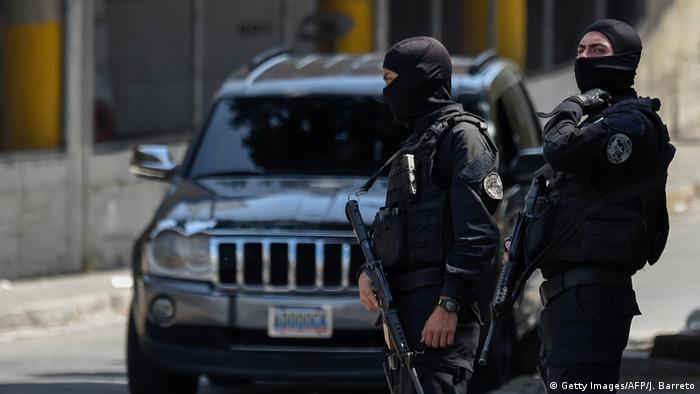 At least 29 inmates were killed in a shootout with Venezuela's special FAES police division, with 19 police officers wounded, Venezuelan authorities said on Friday.

"There was an attempted escape and a fight broke out among(rival) gangs," Portuguesa Citizen Security Secretary Oscar Valero told reporters.

"With police intervention to prevent the escape, well, there were 29 deaths," he said, adding that detainees activated three grenades during the clash in a police station in Acarigua, northwest Venezuela.

Some sources reported the activists were armed and had taken hostages before the shootout. Other, including the Venezuelan Prison Observatory (OVP), slammed the incident as a "massacre."

"How is it that there was a confrontation between prisoners and police, but there are only dead prisoners?" Humberto Prado of OVP asked. "And if the prisoners had weapons, how did those weapons get in?"

According to Prado, detainees were pushing back against the initiative to transfer them to prisons where their relatives would not be able to visit. The police entered the premises to carry out searches and remove visiting women when the violence started, he added.

Prisons full of 'rats and insects'

The police station jail had been designed to hold 250 inmates but was allegedly housing over twice that number. Although police jails are made to hold citizens for up to 48 hours, many inmates spend months in them before being transferred, partly because prisons are also overcrowded and partly because of the slowness of the justice system.

The nation's prisons ministry did not comment on the Friday incident, saying police station jails are out of their jurisdiction.

Last year, the UN slammed the dramatic overcrowding and dismal conditions in detention facilities across the country.

"The infrastructure is infested with rats and insects," UN official Ravina Shamdasani, "And in many detention centers across the country, detainees have limited access to food and water, including drinking water."