A Belgium court has ruled that Spanish rapper Valtonyc will not be extradited, arguing that his offenses — allegedly glorifying terror — were not a crime under Belgian law. 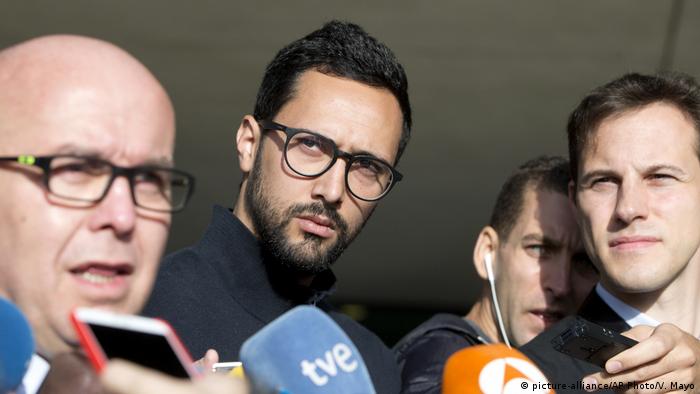 'First they ignore you, then they laugh, then they attack you and finally, you win,' the Spanish rapper tweeted

He fled to Belgium in 2018 after being sentenced to three-and-a-half years in prison on charges of glorifying terror, insulting the Spanish monarchy and making threats in his lyrics.

Valtonyc, 28, said he was "finally free and happy" after having been subject to regular police checks as he fought against a European arrest warrant. "I'm not a terrorist and the court has proved me right," he said.

Beltran's lawyer Simon Bekaert welcomed the decision, calling it a "good day for music and freedom of expression."

"Victory! After three years of legal procedures, a detour to the European Court of Justice and to the Belgian Constitutional Court, the Court of Appeal rules that Valtonyc cannot be extradited," Valtonyc wrote on Twitter.

Bekaert said the appeals court in the city of Ghent had ruled that the offenses were not a crime under Belgian law.

"There is no extradition for any of the three cases... It is over. The court has said: the things for which he has been condemned in Spain are not crimes in Belgium," he told reporters after hearing the ruling.

Valtonyc was sentenced for lyrics in songs published online in 2012 and 2013. At the time, the Mallorcan was a little-known rapper in the Balearic Islands. Gradually he received popular support in Catalonia, especially within the separatist movement.

His controversial lyrics included: "Let them be as frightened as a police officer in the Basque Country," and "the king has a rendezvous at the village square, with a noose around his neck."

The reference to the Basque Country was understood by Spanish authorities to be a welcome to violence by the Basque separatist group, ETA.

At least 800 civilians and state officials have died in violent attacks carried out by the armed group across Spain.

The Spanish courts accused the rapper of praising the ETA, as well as the defunct October First Antifascist Resistance Group (GRAPO) in his songs, thus raising charges linked to the exaltation of terrorism, which constitutes a punishable felony in the Spanish criminal code.

The musician has defended his controversial lyrics, saying they are within his freedom of expression and of art, arguing that rap often makes use of extreme, provocative, allegorical and symbolic language.

Accusations of slandering the Spanish monarchy

The musician also came under fire for calling former king Juan Carlos of Spain a "thief."

Juan Carlos, the father of the current King Felipe VI, is legally protected against insults and slander by their subjects.

Juan Carlos, who abdicated in 2014, is facing a string of corruption allegations. He is currently being investigated over his alleged role in a deal under which a Spanish consortium won a €6.7 billion ($7.6 billion) contract to build a high-speed rail line in Saudi Arabia.

"They have condemned me for calling him a thief and in the end he is a thief," the rapper said.

Rapper thanks Belgium for 'right of expression'

Valtonyc thanked his supporters on Twitter following the ruling on Tuesday.

"First they ignore you, then they laugh, then they attack you and finally, you win," he wrote.

The rapper also said Belgian magistrates "have shown that they are independent" and that they "respect European standards of the 21st century."

"Belgian society can be happy that the right of expression, the freedom to express oneself, has been respected," he declared.

The Valtonyc case also forced Belgium to consider changes in its lèse-majesté law.

In Belgium, the slander, defamation or insult of the monarch and the royal family are still technically crimes under a 1847 law, although it is rarely enforced, especially after the country repealed insult laws that protected foreign heads of state in 2005.