A new study has found that cases of the highly contagious disease have jumped significantly in the past year. Adults are poorly informed about their own vulnerability, the report found. 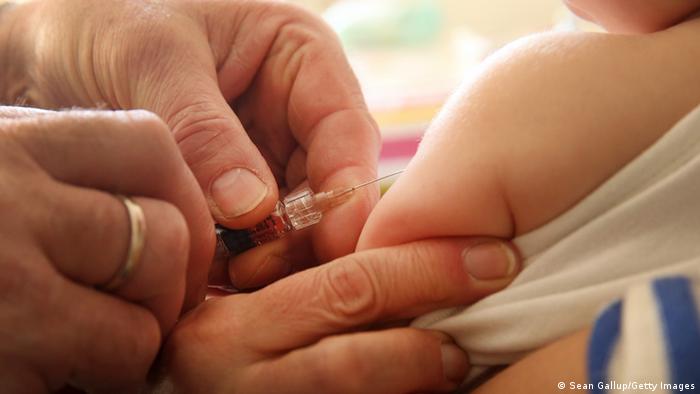 The European Centre for Disease Prevention and Control (ECDC) released a report on Monday highlighting the recent troubling outbreaks in cases of measles and rubella across the continent, which have resulted in at least 9 fatalies. Two crucial factors could be vaccine skepticism as well as adults being ill-informed about how susceptible they are to the illnesses.

The study said that during the January and February 2017, there were more than 1,500 cases of measles in 14 different European countries. The result of "an accumulation of unvaccinated individuals," the report found that some 42 percent of the cases in 2016 were from Romania alone.

This backed up claims made by Italy's Health Ministry last week that both "Italy and Romania have an epidemic at the moment," with Rome estimating that only 85 percent of its under two-year-olds are vaccinated against the disease. The center-left government led by the Democratic Party (DP) has accused the left-wing populist Five Star Movement (M5S) of spreading anti-vaccine sentiment by fighting efforts to make the immunizations obligatory.

In Romania, the sharp uptick could also be a result of the country's large Roma population being either too wary of the vaccines, or too far removed from medical services to receive them. A World Health Organization study in 2013 found that during a larger outbreak in neighboring Bulgaria, 90 percent of those who fell ill were Roma children.

But it was not only Italy and Romania, but also Germany, Austria, Belgium, Croatia, France, Poland, Spain and Sweden where, according to the report, cases in the first two months of 2017 were double that of January-February 2016.

Of the nine deaths, eight were in Romania and one was in the United Kingdom.

Measles is a highly contagious infection that causes extremely high fever, rash, and when not treated, it can be fatal for children. An airborne disease, it can be spread easily through coughing and sneezing. Rubella is also transmitted through the air and has similar symptoms, but is caused by a different virus.

"It is unacceptable to hear that children and adults are dying from disease where safe and cost-effective vaccines are available," said EU Health Commissioner Vytenis Andriukaitis, according to Reuters news agency.

While it may be tempting to blame the anti-vaccine movement for the uptick in cases, the report said that adults knew worryingly little about their own susceptibility to virus, assuming it was a disease that only affected children.

The findings, ECDC said, "highlights the importance of closing immunisation gaps in adolescents and adults who have missed opportunities for vaccination in the past."

On the same day the ECDC released its report, a related study was published by the German Association of Pharmacists (ABDA) . The group said that pharmacies across the country had deliverd some 1.9 million vaccine doses to doctors in 2016, a 18 percent drop from 2015.

"The measles outbreak two years ago obviously had only a short-term positive effect on vaccination," said ABDA vice-president Mathias Arnold was quoted by German new agency DPA as saying.

The World Health Organization (WHO) has declared April 24-30 as World Immunization Week, hoping to spread information about the importance of vaccinations to lowering the risk of disease globally.

Germany's vaccination rate for the highly contagious measles virus falls well below WHO targets. Authorities are calling for people to stay up to date with their vaccinations. (17.02.2017)

Five pathogens that can harm an unborn child

In addition to the Zika virus, there are other pathogens that can cause damage to unborn children inside the womb. Here are five types of infections that are less dangerous to adults than their offspring. (31.01.2016)