Vit Jedlicka has claimed a parcel of land between Croatia and Serbia and named it Liberland. No country has recognized the "state," but that hasn't stopped the founding father pushing ahead with his vision. 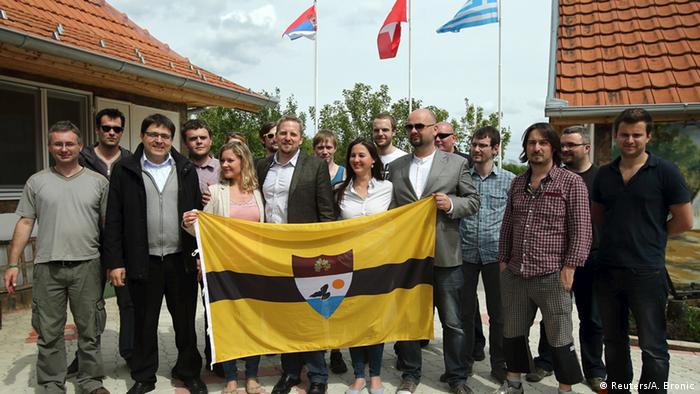 Despite some difficulties - like being arrested at the border of his own self-declared country - the president of Liberland is happy with the way his "great adventure," as he calls it, is shaping up.

Czech politician Vit Jedlicka proclaimed the microstate on a disputed patch of land sandwiched between Serbia and Croatia in mid-April. Since then, he's received more than 330,000 citizenship applications from people all over the world.

"Setting up a new country is actually much easier than I thought it would be," the 31-year-old libertarian politician told DW. "I've been going with the flow."

His creation, The Free Republic of Liberland (Svobodná republika Liberland), has an official website available in four languages, a flag, a coat of arms, a draft constitution and a motto - "Live and let live."

Its main aim, says Jedlicka, is to give society a chance to flourish without taxes, state regulation, and market controls. In its draft constitution, Liberland is described as a "constitutional republic with elements of direct democracy."

Residents won't have to pay taxes if they don't want to, and there'll be few restrictions on their freedoms. Punishable crimes, apart from the usual offenses, are listed as "polluting the environment," and "public nuisance."

Tax haven in the Balkans 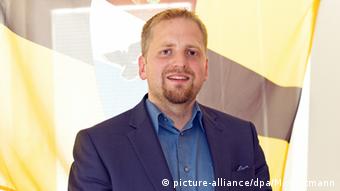 Jedlicka, a staunch euroskeptic and member of the right wing Free Citizens party, says he had tried for years without success to push for political change in his native Czech Republic.

"I was starting to get a little bit nervous that even if I tried all my life I wouldn't be able to make any change at all," he said.

His friends told him he should set up his own state to try out his libertarian ideas. So he did.

Thus far, Liberland hasn't been recognized by any country in the United Nations. Few countries have even commented on its existence. Only fellow self-proclaimed micronation Kingdom of North Sudan, set up by American Jeremy Heaton in 2014, has pledged its support.

Jedlicka says his creation of the 7-square-kilometer (3-square-mile) state on the remote, heavily forested territory lining the Danube River is completely legal, because the land hadn't been claimed by Serbia or Croatia in the aftermath of the Balkan wars. He added that his team had been abiding by the Montevideo Convention, which is commonly used to define a state.

But Bojan Milisavljevic, a law professor at the University of Belgrade, Serbia, said the territory is not no-man's land to be claimed, adding that the formation of micro-states in the territories of other countries is "illegal and punishable from the standpoint of international law."

Land of the free?

The lack of official recognition has created some problems for Jedlicka. Over the past week, police from Serbia and Croatia blocked would-be Liberland residents from crossing the border to settle in the "country." Jedlicka himself was arrested at the border.

According to the Croatian interior ministry he was detained for crossing the border between Croatia and Serbia outside the official border crossings.

Jedlicka, however, laughed off the incident, saying it was an opportunity to begin talks with officials about opening a border crossing between Croatia and Liberland.

"The Croatian authorities don't recognize me as a head of state yet," he said. "But you couldn't imagine having more fun than I had with these guys. The police offered me their service for Liberland."

Jedlicka says he is now trying to raise money for a fleet of boats so that visitors can instead reach the self-declared country directly via the Danube - an international waterway. 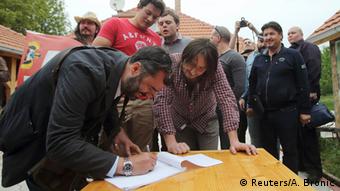 Only a few dozen people have been granted Liberland citizenship, despite the flood of applications. The self-professed country's website states prospective citizens should have respect for personal freedoms and private property, and no "communist, Nazi, or other extremist past."

The first Liberland residents, most of them from Switzerland, are already living at the site in tents. At the moment the only building on the land is an abandoned barn, but Jedlicka says there are plans to move in more boats and some mobile homes.

The first round of citizens are people who've offered to help while the country finds its feet - with finances, diplomacy, infrastructure projects, settling the land, or with administrative duties.

"We've had a lot of interest from the Western world, and also lots of interest from Arab nations, where there is perhaps an even greater need for more freedom at the moment," said Jedlicka.

In the meantime, he's enjoying the immense publicity his project has generated, and hopes to use it to build support among politicians who share his views. The young Czech has been invited to meet politicians in the Netherlands, and in Norway, where the Capitalist Party has backed the creation of Liberland.

Jedlicka expects to be busy for the foreseeable future, but he eventually plans to move to Liberland with his "first lady."

It should have been the end of the political crisis. Instead, the Czechs chose a protest vote. Following an early election with no clear winner, a new political crisis looms. (28.10.2013)