US will not charge police officer who shot Jacob Blake

The Justice Department says it won't pursue federal criminal charges against the Wisconsin officer over the shooting last year. Jacob Blake was left paralyzed after the incident that sparked days of protests. 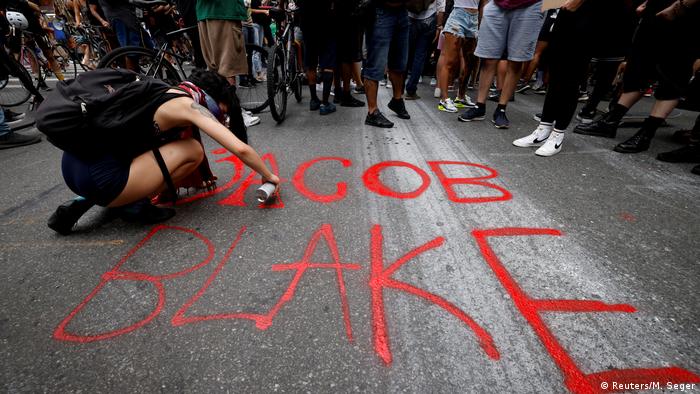 The shooting of Jacob Blake led to protests over racial equality

The US Justice Department announced Friday that they will not follow up charges against the white police officer who shot Jacob Blake last year.

In August 2020, Officer Rusten Sheskey shot Blake, a Black man, several times in the back during a domestic disturbance in Kenosha, Wisconsin.

Blake was left paralyzed from the waist down following the incident, which was captured on a cellphone.

The Justice Department said in a statement it had declined to prosecute due to "insufficient evidence" to prove "beyond reasonable doubt the officer willfully" used excessive force.

Several nights of protests were sparked by the shooting of Blake, during one of which an Illinois man shot three people, killing two of them.

State prosecutors elected not to press charges against Sheskey in January of this year after video footage showed that Blake had been armed with a knife.

Meanwhile, the Justice Department launched its own investigation days after the shooting.

The federal executive said Blake's family had already been told of the decision to not prosecute.

Presidential candidate Joe Biden spent an hour with Jacob Blake’s family and visited a local church to hear from community leaders. He also touched on the US' history of slavery "and all the vestiges of it."

The suspensions took place a day after footage surfaced of a Black man suffocating with a hood over his head. He died after he was taken off life support, seven days after the encounter with police.