Top US diplomat Anthony Blinken has hinted that force could be used if Iran does not return to the negotiating table to salvage the 2015 nuclear deal. Iran is accused of violating the deal by enriching uranium. 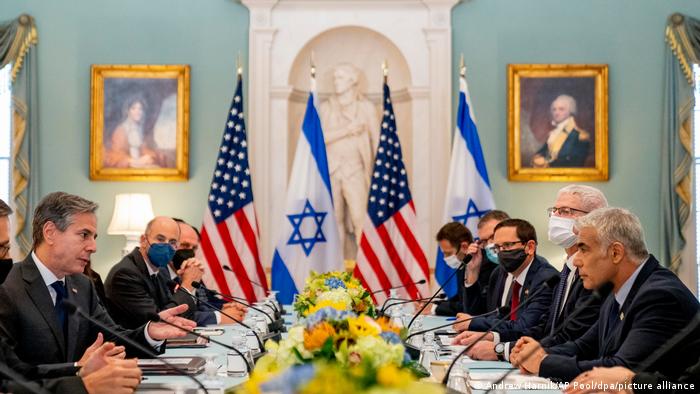 Blinken (front l.) and Lapid (front r.) discussed 'other options' than diplomacy for bringing Iran back to the 2015 nuclear deal

The United States and Israel said Wednesday they were looking at further possible ways of dealing with Iran if Tehran does not come back in good faith to negotiations to rescue a landmark nuclear deal.

Speaking after three-way talks with the foreign ministers of Israel and the United Arab Emirates, US Secretary of State Antony Blinken said "other options" were on the table if Iran were to reject an offer to comply again with the agreement in the event that the US rejoins it.

"We will look at every option to deal with the challenge posed by Iran," he said. "And we continue to believe that diplomacy is the most effective way to do that. But it takes two to engage in diplomacy, and we have not seen from Iran a willingness to do that at this point."

Possible non-diplomatic options could include military force, but also a further tightening of sanctions or covert actions against Iran.

Israeli Foreign Minister Yair Lapid was more forthright in his warnings to Tehran.

"There are moments when nations must use force to protect the world from evil,'' he said. "If a terror regime is going to acquire a nuclear weapon we must act," he said.

"Israel reserves the right to act at any given moment in any way. That is not only our right, it is also our responsibility,'' he added. 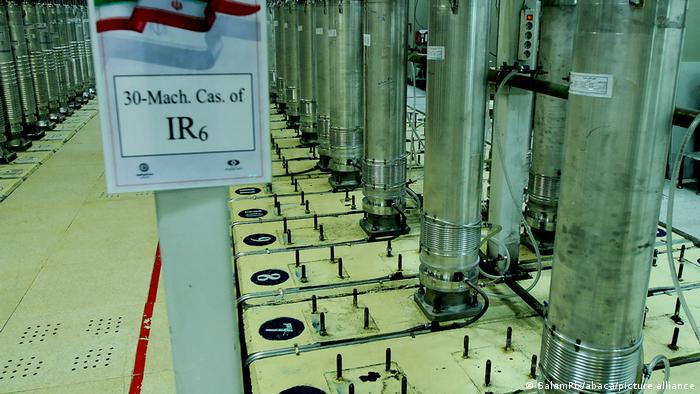 Iran has been enriching uranium in contravention of the deal

What is the nuclear deal?

Under the terms of the 2015 nuclear deal between Iran and several world powers, including the US and Germany, Iran agreed to discontinue certain elements of its nuclear program that the West fears could lead to the development of nuclear weapons.

In return for that and for allowing comprehensive international inspections of its nuclear facilities, the country was to receive billions of dollars' worth of sanctions relief.

The deal has been in jeopardy since former US President Donald Trump withdrew from it in 2018, with Iran violating a number of the agreements it had made.

Israel was not a party to the deal, which was negotiated by the administration of former US President Barack Obama.

Iran has indicated that it might be ready to come back to indirect negotiations on the deal with the US but has not set a definite date.

Tehran has always denied it is seeking to build nuclear weapons, claiming its atomic research is for civilian purposes.