US warns of nearly invincible superbug

A strain of bacteria resistant to all known medications has been found in the US for the first time. Experts have long warned that overuse of antibiotics is creating drug-resistant bugs increasingly difficult to control. 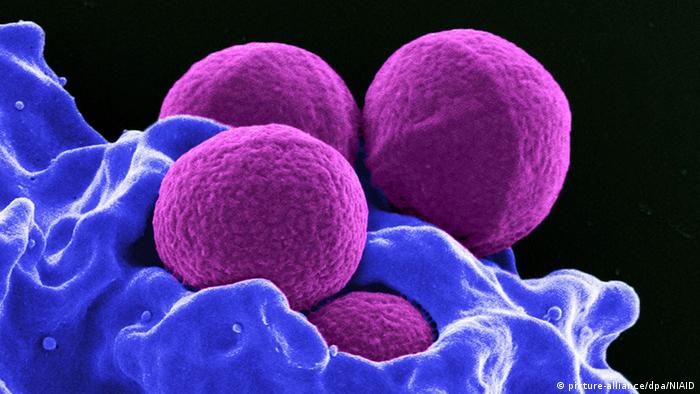 US health officials reported Thursday that they had discovered the first case in the country of a patient with an infection resistant to all known antibiotics. The discovery raises fears that the so-called superbug could pose serious danger for routine infections if it spreads.

"We know now that the more we look, the more we are going to find. We risk being in a post-antibiotic world," said Thomas Frieden, director of the US Centers for Disease Control and Prevention, referring to the urinary tract infection of a 49-year-old Pennsylvania woman who had not travelled within the prior five months.

"We need to do a very comprehensive job of protecting antibiotics, so we can have them and our children can have them," Frieden added.

The findings were first published in Antimicrobial Agents and Chemotherapy, a journal of the American Society for Microbiology. The report gave no details about the outcome of the woman's case.

The superbug itself had first been infected with a tiny piece of DNA called a plasmid, which passed along a gene called mcr-1 that confers resistance to colistin - doctors' last-line of defense against hard-to-kill bacteria.

"(This) heralds the emergence of truly pan-drug resistant bacteria," said the study, which was conducted by the Walter Reed National Military Medical Center. "To the best of our knowledge, this is the first report of mcr-1 in the USA."

The bacteria had been previously detected in the UK and Italy.

This comes as the European Medicines Agency (EMA) said Thursday that agricultural use of the last-resort antibiotic colistin should be cut by two-thirds to limit the spread of dangerous drug resistance.

Colistin has been widely available since 1959 to treat infections caused by E. coli, salmonella, and acinetobacter, which can cause pneumonia or serious blood and infections.

It was abandoned for human use in the 1980s due to high kidney toxicity, but remains widely used in livestock farming, especially in China.

"If successfully applied at an EU level, the above threshold would result in an overall reduction of approximately 65 percent of the current sales of colistin for veterinary use," the EMA said.

Colistin has been brought back as a treatment of last resort in hospitals and clinics as bacteria have started developing resistance to other, more modern drugs, leading to secondary infections among patients.

A major review published last week on superbugs called for new steps to address the problem, including limits on antibiotic use in agriculture and investment in finding new drugs.

A new report commissioned by the British government has called for action to combat antimicrobial resistance. The authors suggested a "pay or play" system for pharmaceutical companies to incentivize research. (19.05.2016)

The hunt for new antibiotics