A new gene rendering bacteria immune to an antibiotic has been found in China by a Lancet research team. Doctors worry that it could roll back decades of medical progress, as bacteria adapt to resist antibiotics. 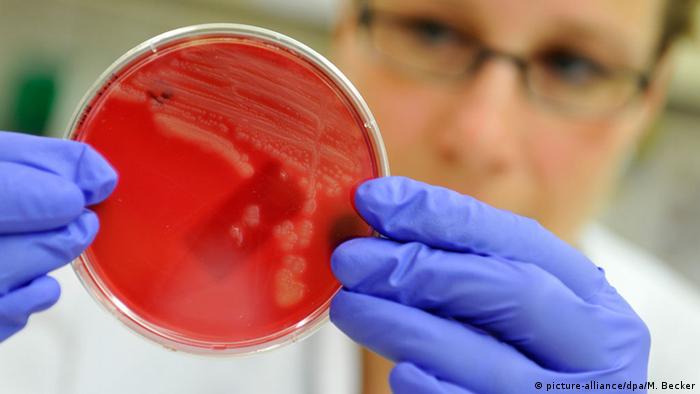 A study published in the British medical journal "The Lancet" said that the discovery stood out for identifying a gene with mobile DNA, a so-called plasmid, which can easily spread from one strain of bacteria to another. Previously-identified cases of antibiotic resistance were formed by genetic mutation and then replicated as the bacteria reproduced, so did not transfer as readily.

Liu Jian-Hua, a co-author of the study, said that the findings amounted to "extremely worryingly results."

In particular, the scientists behind the study identified antibiotic-resistant DNA strands that were being transferred between Klesbsiella pneumoniae, which causes pneumonia, and Escherichia coli (better known as E. Coli), a leading cause of urinary tract infections.

Limiting the use of polymyxins

The scientists behind the discovery have called for urgent restrictions on the use of drugs used in livestock farming, particularly polymyxins, which include the drug colistin used to control common germs like E. Coli.

Laura Piddock, a professor of microbiology at the University of Birmingham, said that the use of polymyxins had to be minimized "as soon as possible" and described the discovery as "worrying."

"Equally worrying is that this type of resistance can be easily transferred between bacteria," she said.

Piddock said that global monitoring for MCR-1 resistance was going to be essential to prevent the spread of polymyxin-resistant bacteria.

Spread from China to Laos

The report said that MCR-1 was "currently confined to China" but added that it was likely to spread globally. But there was also evidence suggesting that it had begun to spread to Laos and Malaysia. 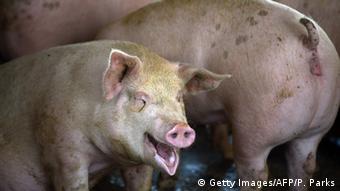 The MCR-1 gene was highly prevelant among pigs, leading to experts recommending people to stop consuming raw or undercooked meat

Christi Lane-Barlow, an epidemiologist working in Laos, told DW that this served as a reminder of the perils of eating undercooked chicken and pork, particularly when sourced from China.

"China is an important trading partner with Laos, and inspection of meat products entering the country is limited. Coupled with the poor hygiene and habits of consuming raw or undercooked meat, the spread of resistance to Laos could create an environment where greater human exposure could occur than if meat was always hygienically handled and prepared," she said.

Lane-Barlow said the study confirmed that the resistance found in MCR-1 could be "spread by plasmids."

"This means that you don't need as much time for resistance to spread as waiting for mutations in the genes of the bacteria," she told Deutsche Welle.

"Generally, mutation in bacteria passes as the bacteria replicate, or reproduce - but not between colonies, as is the case here."

Agricultural use in China

The demand for the antibiotic drug polymyxin was expected to reach almost 12,000 tonnes per year by the end of the year for agricultural use alone, according to the QYResearch Medical Research Reports, a market research firm focused on developments in China. China is one of the world's largest users and producers of colistin, a leading polymyxin used in agriculture and livestock. 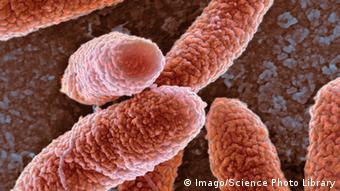 E. Coli bacteria featured the highest prevelance of the MCR-1 gene in the study, which said that it was being passed from animals to humans

Researchers had collected bacteria samples from pork and chicken sold in 30 open markets and 27 supermarkets in Guangzhou, the capital of Guangdong province in South China, for the study between 2011 and 2014, as well as from pigs at slaughter across four provinces.

They found a high prevalence of the MCR-1 gene in E. Coli samples both in animals and raw meat, with the number of positive-testing samples increasing each year. On average, more than 20 percent of bacteria in the animal samples and 15 percent of the raw meat samples had the gene.

The scientists also discovered the MCR-1 mutation in 16 E. Coli and K. Pneumoniae samples from 1,322 hospitalized patients. The study found that the lower infection rate among humans almost certainly meant that the resistant strands of bacteria were being passed from animals to humans.

"One of the few solutions to uncoupling these connections is limitation or cessation of colistin use in agriculture," they said. "Failure to do so will create a public health problem of major dimensions."

Professor Timothy Walsh of the University of Cardiff, who also collaborated on the study, told the BBC News website that the discovery of MCR-1 could mean that the use of antibiotics could soon become obsolete.

"If MRC-1 becomes global, which is a case of when not if, and the gene aligns itself with other antibiotic resistance genes, which is inevitable, then we will have very likely reached the start of the post-antibiotic era," he said.

"At that point if a patient is seriously ill, say with E. Coli, then there is virtually nothing you can do."

The World Health Organization (WHO) had previously warned that the advent of antimicrobial resistance could lead to "a return to the pre-antibiotic era," where even small infections would prove fatal while stressing that the issue of antibiotic resistance was widely underestimated.