US Treasury Secretary Janet Yellen has warned the US government will run out of money next month. She called on Congress to raise the debt limit in a letter to House Speaker Nancy Pelosi. 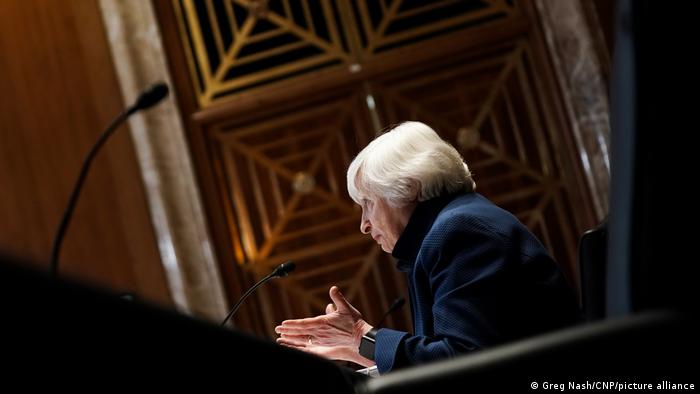 US Treasury Secretary Janet Yellen warned Wednesday in a letter to House Speaker Nancy Pelosi that the US government will effectively run out of money in October unless Congress acts to raise the federal borrowing limits.

As is, Yellen said the Treasury has taken "extraordinary measures" to keep the government supplied with funds. In her letter to Pelosi, she warned that if the debt limit was not raised, "the United States of America would be unable to meet its obligations for the first time in our history."

US government debt soared during the pandemic as Washington passed three large spending bills to lessen the negative economic impact.

Congress has never failed to act to raise the debt ceiling or suspend it rather than face a shortage of funding. However, a budget battle between the Obama administration and Republicans went on long enough in 2011 that credit rating agency Standard & Poor's downgraded a portion of Treasury debt from its AAA rating for the first time in history.

In her letter, Yellen wrote, "Based on our best and most recent information, the most likely outcome is that cash and extraordinary measures will be exhausted during the month of October." The Treasury could not provide an exact date for when the current limit will be reached.

The debt limit had been suspended for two years beginning in July 2019 when public debt subject to the limit stood at $22 trillion (€18.6 trillion). That two-year suspension lapsed at the end of July, resetting the ceiling at $28 trillion.

Congress needs to act by October

At a press conference, Pelosi said, "It has to happen." Under Trump, Pelosi noted Democrats supported raising the debt limit, as it was "the responsible thing to do,” and hoped Republicans would go along with the effort.

Some Republicans have said they would like Democrats to attach a provision to the more than $1 trillion infrastructure plan, a move Democrats have dismissed.