US surveillance by NSA has sometimes 'reached too far,' says Kerry

US Secretary of State John Kerry has told a summit in London that surveillance by the US spy agency NSA has sometimes gone too far. Kerry however defended the need for espionage in the fight against terrorism. 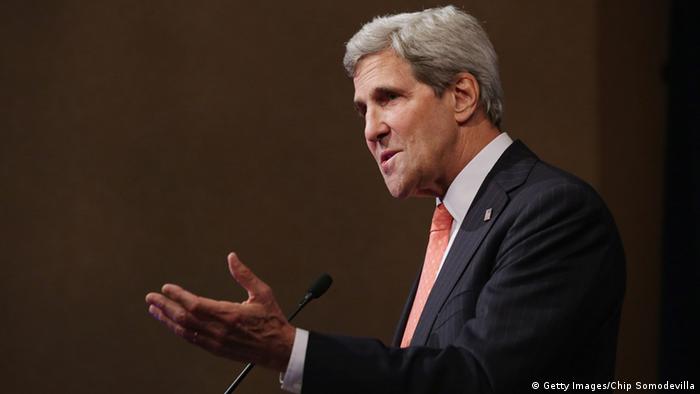 In remarks made to an "open government" conference via video link, Kerry conceded on Thursday that restraint in gathering data was necessary, while insisting that US surveillance had prevented a number of terrorist attacks.

"In some cases, I acknowledge to you, as has [US President Barack Obama], that some of these actions have reached too far, and we are going to make sure that does not happen in the future," Kerry said.

"And the president, our president, is determined to try to clarify and make clear for people, and is now doing a thorough review in order that nobody will have the sense of abuse," he added.

He is the first US official to admit that the National Security Agency (NSA) had sometimes overstepped in its bid to gather information.

However, Kerry stressed that surveillance has produced information that has stopped planes being attacked, "buildings from being blown up, and people from being assassinated."

He also disputed news reports that 70 million people had been listened too, saying there was "an enormous amount of exaggeration in this reporting."

Kerry's remarks came in response to a growing international row over revelations about US spying on allies, which come to light mainly through information leaked by former NSA subcontractor Edward Snowden.

Last week, German Chancellor Angela Merkel angrily confronted US President Barack Obama with allegations that the NSA had tapped her mobile phone, calling it a "breach of trust." Reports on NSA surveillance of phone calls in other European countries have further fueled outrage on the continent.

The scandal has now also spread well beyond Europe's borders, with Indonesia summoning Australia's ambassador on Friday to explain media reports that his embassy had been used to spy on Indonesia as part of the US espionage program.

This came after the Australian Sydney Morning Herald newspaper reported that Australian embassies across Asia were part of US spying operations. The Herald said its reports were based on information from Snowden and a former Australian intelligence officer.

Another media report from the Washington Post on Wednesday alleged that NSA technicians had tapped into Yahoo and Google data centers around the world to gather information under a program dubbed "Muscular."

US senators have meanwhile taken a small step toward curbing the NSA's activities.

The US Senate Intelligence Committee on Thursday approved draft legislation by a vote of 11-4 to set new limits on how much American telephone data the NSA can gather. It would also impose a five-year limit on the storage of such data.

Critics have attacked the proposed changes as being, at best, a paper tiger. It also remains uncertain whether they will ever become law, as the draft bill would have to be first passed by both the Senate and the House of Representatives before being signed by the president.