US students bring Kurt Vonnegut back to Dresden for firebombing anniversary | Culture| Arts, music and lifestyle reporting from Germany | DW | 12.02.2014

US students bring Kurt Vonnegut back to Dresden for firebombing anniversary 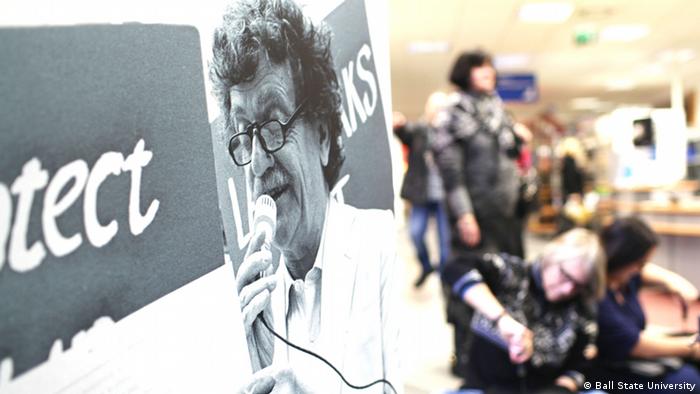 In his carry-on luggage, Kyle Royse packed a lucky dollar bill from his grandfather and a pristine paperback copy of "Slaughterhouse-Five." It was the first Kurt Vonnegut, Jr. novel the recent college graduate had ever read.

For six months, Royse and a team of 11 fellow students combed through handwritten letters, marked-up manuscripts, personal photos, and audio recordings of the American novelist with German heritage. 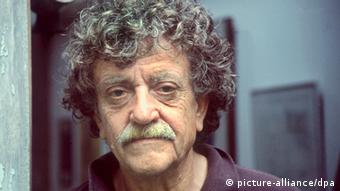 Under the guidance of Professor Rai Peterson, the students delved into an immersive learning seminar at Ball State University in Muncie, Indiana, intent on bringing Kurt Vonnegut back to life. They interviewed Vonnegut's relatives, dusted off video reels and digitized drafts of his work.

The result: "Vonnegut's Voice," the most comprehensive interactive collection about the legendary satirist and novelist to date.

Now members of the group have chaperoned the exhibit - all six containers and 125 kilograms of it - from Indiana to Germany. Its destination is the Dresden Public Library, in the city where the young Allied soldier Vonnegut was imprisoned by Germans and placed with other POWs inside an underground meat locker named Schlachthof Fünf, or Slaugherhouse-Five. The macabre accommodation helped Vonnegut survive the firebombing of Dresden on February 13, 1945 and inspired his semi-biographical novel of the same name. 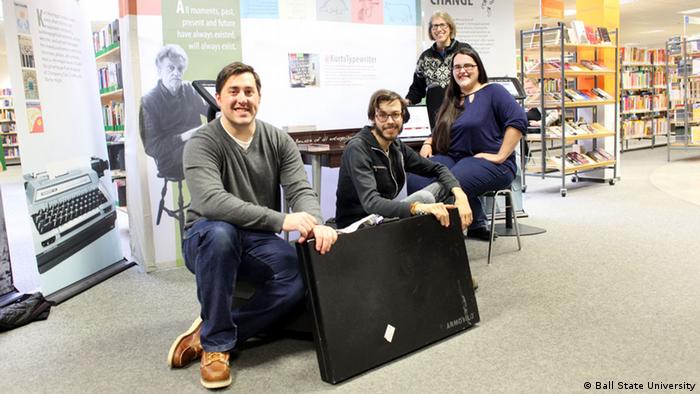 "There is something both eerie and exciting about standing on the spot where a hero was transformed," said Peterson, who developed the idea for an interactive exhibit after visiting the Kurt Vonnegut Memorial Library in Indianapolis, Indiana - Vonnegut's birthplace.

Although Vonnegut suffered at the hands of the Nazis, the author was critical of war and the firebombing of civilians, said Julia Whitehead, director of the Kurt Vonnegut Memorial Library, where the exhibit is housed when not on tour.

"[Kurt Vonnegut] ached for the women, children, pets, grandmas, grandpas, and others he was tasked with burying following the firebombing," Whitehead said, adding that his work is "a reminder about all of the innocent people who are affected by the decisions of generals and politicians."

On the 69th anniversary of the firebombing, members of the seminar who designed the exhibit will descend the stairs to the cellar where Vonnegut was imprisoned to share their research. The former "slaughterhouse" is now home to the Messe Dresden, a trade fair facility. Specifically, it's now a coat check.

Despite his revered status across the ocean, Vonnegut remains largely unknown in Germany.

"I would say 95 percent of the German public doesn't know who Kurt Vonnegut is and doesn't realize the significance of this place," said Ulrich Finger, director of the Messe Dresden. 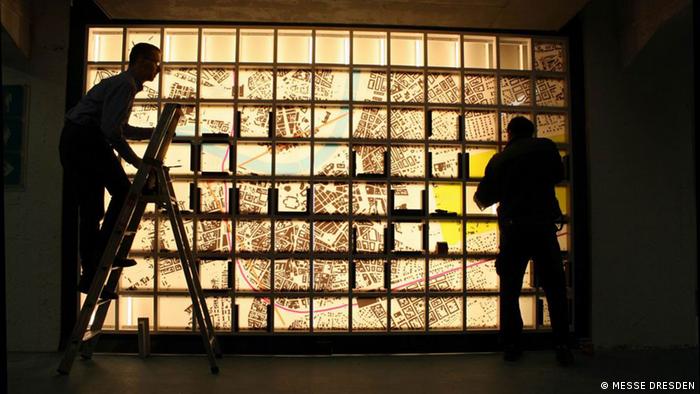 A memorial wall was unveiled on the site last February to commemorate Vonnegut and the cellar's historical significance. But it was damaged by the flooding of the Elbe River just a few months later. The wall has since been restored, and at its reopening ceremony on February 13, the group of Ball State students will share their ideas about how the Messe Dresden can bolster its commemoration of Vonnegut.

Ansgar Snethlage of the Military History Museum of the German Army said he hopes the exhibit generates awareness in Germany. Snethlage watched from the sidelines as the group unveiled giant banners and plugged in iPads to spark life into the interactive exhibit.

"There have been very few writers in Germany who wrote about the bombing of German cities - and those who did write about it were not read widely by the Germans," Snethlage said. 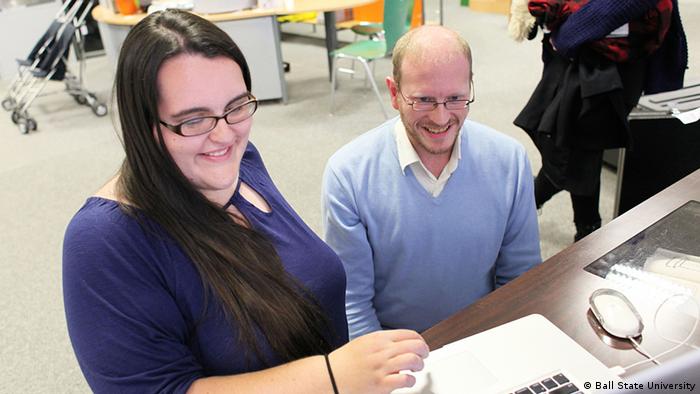 Lacey Lord shows Ansgar Snethlage the Vonnegut manuscript collection; Snethlage is working on an exhibition for his museum about art and literature influenced by World War II bombings

Awareness is in the works. On the heels of the students' traveling exhibit, Snethlage said the Military History Museum has slated its own exhibition next January titled "Slaugtherhouse-Five: the destruction of Dresden in literary witnesses."

Currently, Danilo Hommel is the only guide to offer tours of Vonnegut's Dresden and "Slaughterhouse-Five." Hommel said the majority of his guests are American, but overall popularity is increasing, despite what he says is a lack of interest by the city to address the Vonnegut connection.

"A story like 'Slaughterhouse-Five,' peppered with history, reality and future is great. It is not easy to read, but the story is very unique," Hommel said, adding that Vonnegut's critical eye is crucial to avoid repeating history's mistakes.

Not only is Vonnegut's portrayal of the past valuable, said Kyle Royse, but his work is timeless: "Vonnegut wrote about social issues and wrote for the people." From human rights to war criticism, Royse said Vonnegut's topics from the 1960s hold relevance today.

"He questioned his government, he argued against organized religion, and he was particularly outspoken against war, unequal distribution of wealth, and dehumanizing government laws that rob people of their dignity," said Rai Peterson.

She credits Vonnegut's outspoken nature to his German-American heritage, saying that he was taught to rely on his intellect.

So far the exhibit at the Dresden Library has turned a few heads and generated unexpected surprises. 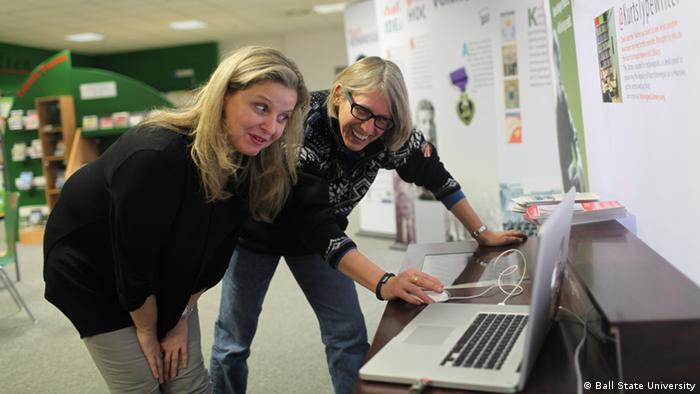 "We just happened to be near the exhibit, and a man approached me," said Elke Ziegler, spokesperson for the Dresden Public Library. "He held an old East German copy of 'Slaughterhouse-Five' in his hand - probably the first German edition. He said he had been friends with the taxi driver Vonnegut mentioned in the book."

After writing "Slaughterhouse-Five," Vonnegut returned to Dresden and gave a copy of the book to the taxi driver, who has since passed away. That gift had landed in the hands of the library patron standing in front of Elke Zeigler.

"The man wanted me to give this book to the American students," Zeigler said. "So I promised him that I would."

Now a vintage East German version of Vonnegut's "Slaughterhouse-Five" will join Kyle Royse's preserved paperback amongst the six exhibit containers for the journey back to the United States. The gift will be christened into the traveling collection and serves to show that Vonnegut's voice does, indeed, still resonate.

Digital and media art are stretching our definition of creativity and the role of the artist. But they also pose urgent questions about ownership and quality. When does it touch our emotions? And when is it "good" art? (20.01.2014)

In the internet age, users can now interact with music videos. Musical heavyweights like Bob Dylan are keen to take advantage of this new technology, and it’s proving a hit with fans. (12.12.2013)

In the land of Goethe and Schiller, books - yes, even the paper kind - are still a favorite Christmas gift. But Germans' love of literature extends well beyond the holiday season. (23.12.2013)