US scientists take a knee to protest racism | Science| In-depth reporting on science and technology | DW | 27.09.2017

US scientists take a knee to protest racism

Across the US, scientists have posted pictures to social media as part of the #ScientistsTakeAKnee campaign. It's the second time in a year they've spoken out loudly on a political debate. 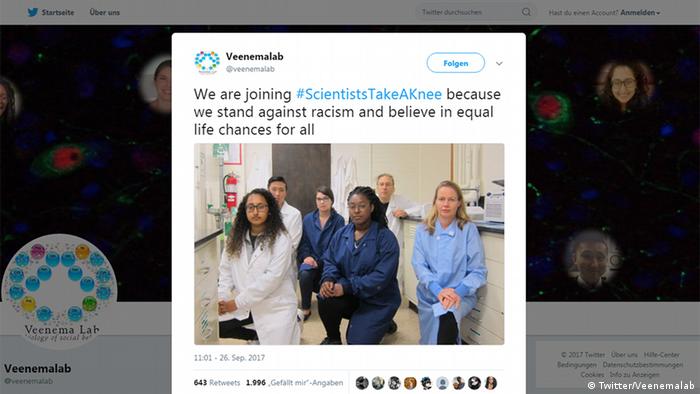 In pictures, videos and messages posted to social media on Tuesday (26.09.17), scientists in the United States joined an online debate highlighting racial injustice in the country.

Under the hashtag #ScientistsTakeAKnee, people or groups connected to the "STEM" fields of science, technology, engineering and math documented themselves as they dropped down to one knee in solidarity with African-Americans.

Many posted selfies, like this one from biologist Michael Eisen of UC Berkley.

Or Kyle Cranmer, a particle physicist.

Or this one from Emily Lakdawalla, a planetary scientist.

Many more posed together with colleagues in group photos, which poured in from all corners of the US.

One was posted by the Boston-based Union of Concerned Scientists, which, in the name of good science, also linked to some of the raw data on police brutality.

As did an ecologist and colleagues in California.

In Maine, scientists paused during a daytime hike to take part in the campaign.

With the largest group of all demonstrating outside a University of Michigan building at a collective "kneel-in."

One message of support was even posted from the Arctic.

Tuesday’s #ScientistsTakeAKnee campaign fits within the broader #TakeAKnee movement, which protests against racial inequalities in the US to show solidarity with African-American victims of police brutality.

The campaign began in 2016 after professional American football quarterback Colin Kaepernick controversially kneeled during the US national anthem just before a preseason game.  He later explained he didn’t want to show pride in a flag "for a country that oppresses black people and people of color." He said US police officers were "getting away with murder."

But as other athletes and people outside of sports adopted and modified the pre-anthem kneel, public discussion of the gesture dwindled - until US President Donald Trump suggested athletes taking a knee should be "fired."

Cue the debate. As a group, scientists joined in after a popular anonymous "lady scientist" blogger created the hashtag on Monday (see tweet replies below) and encouraged others use it.

Echoing the debate around the March for Science movement earlier in the year, some have questioned whether scientists - and the institutes they work for - should voice opinions on political issues at all.

One of the dissenters was chemical engineer Craig Mansfield, who prefers science to be just that and nothing else.

But for the second time in a year, a significant number of US scientists and institutions have answered the question with a resounding "Yes."

"Yes," they say, "scientists should speak up on issues of political importance."

Of the negative reactions to the campaign, a significant number were less concerned about scientists voicing their opinions, but rather the validity of the racial inequality debate itself.

Amongst the supporters of the #ScientistsTakeAKnee campaign, some have noted that this issue is, in fact, very much relevant to the sciences. Racial inequalities outside the lab, they say, are often reflected inside labs as well.

Many posts, particularly those made by people of color, hope this campaign, beyond addressing broader issues of racism, might also help to focus attention on racial issues within STEM fields as well.

Tens of thousands of science supporters are expected to rally across the globe to highlight evidence-based facts. Climate change denial, "alternative facts" and Donald Trump have catalyzed the community. (22.04.2017)

Opinions divided on March for Science in the US

Scientists around the globe will take to the streets in defense of their disciplines at the March for Science on April 22. But especially in the US, the march is met with mixed feelings. (20.04.2017)