US sanctions Iran's morality police for 'abuse' against women 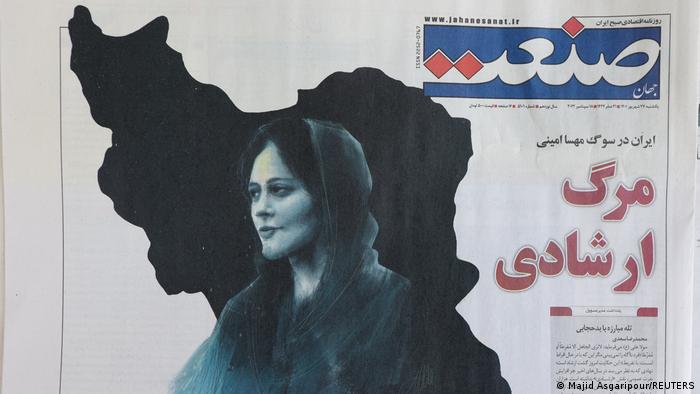 The United States on Thursday imposed sanctions on Iran's feared morality police, accusing it of "abuse and violence against Iranian women and the violation of the rights of peaceful Iranian protesters."

The sanctions imposed by the Office of Foreign Assets Control, an arm of the US Treasury Department also targeted seven senior leaders of Iran's security organizations.

It comes amid unrest in the Islamic Republic over the death of Mahsa Amini.

The 22-year-old woman died in police custody after she was arrested for allegedly wearing a headscarf in an "improper" way under Iran's strict dress code for women.

The US Treasury said the morality police was "responsible" for Amini's death as it announced the sanctions.

"Mahsa Amini was a courageous woman whose death in morality police custody was yet another act of brutality by the Iranian regime's security forces against its own people," US Secretary of the Treasury Janet Yellen said.

Speaking on the sidelines of the UN General Assembly on Thursday, Iranian President Ebrahim Raisi said that the death of Mahsa Amini needed to be investigated, but also accused Western powers of hypocrisy for raising concerns.

"Rest assured, it will certainly be investigated," Raisi told reporters, while claiming that the coroner's report did not indicate police abuse.

Protests in Iran after woman dies in police custody

US Treasury turns its sights on Iranian security personnel

The US Treasury also sanctioned senior security officials, including Esmail Khatib, Iran's Minister of Intelligence, Kioumars Heidari, the commander of the Iranian Army's Ground Forces, and the head of the morality police Mohammad Rostami Cheshmeh Gachi.

Any US assets affiliated with those sanctioned would be frozen as part of the sanctions.

The sanctions also prohibit Americans, including international banks with US operations, from doing business with them, effectively limiting their access to global financial networks.

More than a dozen dead in protests

Iran's powerful Revolutionary Guards called on the judiciary on Thursday to prosecute "those who spread false news and rumors" in an apparent bid to take the steam out of nationwide protests over Amini's death.

At least 17 people have died in the country in days of protests over the death of Amini, Iranian state media reported.

Clashes between security forces and protesters have been ongoing since Amini died while in police custody on September 13.

Among the victims from the ensuing protests have been both security forces and demonstrators, according to Iranian media.

There were again violent clashes on Wednesday night, with footage, which could not be verified, purported to show shots being fired at those protesting.

A crackdown on internet usage has ensued, with mobile networks and Instagram, which was one of the last available social networks, blocked.

Fears of a crackdown worse than 2019

"Iran is now subject to the most severe internet restrictions since the November 2019 massacre," NetBlocks wrote on Twitter. In 2019, crackdowns on protests against rising fuel prices led to the deaths of some 1,500 people, according to human rights groups.

"I am afraid that even worse things are ahead of us than what we experienced in 2019," Saeed Dehghan, a Tehran-based human rights lawyer, told DW.

"The situation is very tense. Many people are angry and desperate. They feel they have hardly anything left to lose. Now the death of a young woman for allegedly violating the headscarf law has brought out the anger and resentment against the political system. It's a serious domestic crisis, and the government has no answer except further repression," Dehghan said.

"The Internet shutdown has a clear purpose: Police and security forces will crack down on demonstrations and massacre them. The world must not see the pictures of this," Dehghan added.

Germany on the side of 'courageous Iranian women'

German Foreign Minister Annalena Baerbock on Thursday condemned the "brutal attack" on Iranians protesting the death in custody of Amini.

Meanwhile, Iranian male soccer star Ali Karimi wrote on Twitter: "Don't be afraid of strong women. Maybe the day will come when they are your only army."

Amnesty International said an "independent international mechanism of inquiry and accountability" was required to address the widespread impunity in Iran.

"The Iranian government has been systematically violating fundamental human rights for years. Arbitrary arrests, torture, extrajudicial executions and the brutal suppression of protests are encouraged by rampant impunity," Katja Müller-Fahlbusch, a Middle East expert for the rights group said.

British-Iranian journalist Christiane Amanpour said that she had planned an interview with President Ebrahim Raisi on the sidelines of the UN General Assembly in New York, until the Iranian leader refused to show up.

Instead, a member of Raisi's staff arrived, some 40 minutes after the interview was scheduled, and said the president wanted that Amanpour to wear a headscarf.

"I politely declined," the CNN journalist tweeted. "We are in New York, where there is no law or tradition regarding headscarves. I pointed out that no previous Iranian president has required this when I have interviewed them outside Iran."

Raisi's aide had said the headscarf was a matter of respect, referring to traditions in Iran.