US pulls UNESCO funding after Palestine admitted as member | World | Breaking news and perspectives from around the globe | DW | 01.11.2011

US pulls UNESCO funding after Palestine admitted as member

The United States has announced it will withhold funding for UNESCO after the UN's cultural body admitted Palestine as a member. The US sees UNESCO's decision as counterproductive to the Middle East peace process. 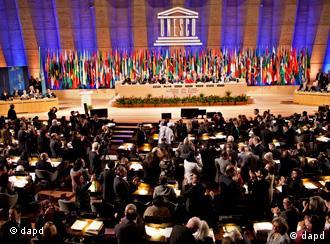 After the vote, cheers rang out in the UNESCO hall

The United States has announced it will stop its financial contributions to the United Nations Educational, Scientific and Cultural Organization (UNESCO) after the body admitted Palestine as a member on Monday.

"We were to have made a $60 million payment to UNESCO in November and we will not be making that payment," said the US State Department's spokeswoman, Victoria Nuland. 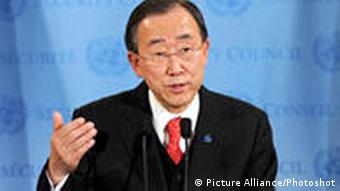 The United States provides about 22 percent of UNESCO's budget.

"We will need to work on practical solutions to preserve UNESCO's financial resources," he said, adding that is was "urgent" to carry on with negotiations to achieve a lasting peace deal between Israel and the Palestinians.

"This is about peace, identity, culture, heritage and freedom of expression," said a spokesman for Ashton. "The EU therefore urges all parties to pause for reflection before taking precipitate actions."

At UNESCO's General Assembly on Monday, delegates voted to admit Palestine. Of UNESCO's 193 members, 107 approved recognizing the Palestinians, while 14 countries voted against and 52 abstained.

Among those to vote against UNESCO membership for the Palestinians were Germany, the United States and Israel. France approved the motion, as did nearly every Arab, Africa, Latin American, and Asian delegation. 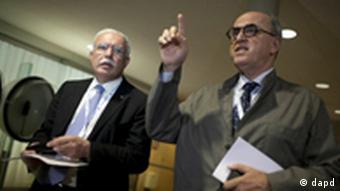 Riad al-Maliki, left, was thrilled with the result

"This vote will help erase a tiny part of the injustice done to the Palestinian people," Palestinian Foreign Minister Riyad al-Malki told the delegates in Paris.

It was expected that UNESCO would pass the motion granting Palestinian membership, although the United States had said it would exercise its veto power to reject a similar bid for full UN membership.

Israel, which has experienced years of tension due to the Palestinians' desire to become an independent state, expressed its dismay that UNESCO let Palestine into the organization.

"Israel rejects the decision of the General Assembly of UNESCO of the 31st October accepting Palestine as a member state of the organization," read a statement from the Israeli foreign ministry. "This is a unilateral Palestinian maneuver which will bring no change on the ground but further removes the possibility for a peace agreement."

The US also views the move as counterproductive to its efforts to help achieve peace in the region.

"Today's vote at UNESCO to admit the Palestinian Authority is premature and undermines the international community's shared goal of a comprehensive, just and lasting peace in the Middle East," said White House spokesman Jay Carney.

The United States ambassador to the UN, Susan Rice, expressed similar disappointment in the decision.

"Today's vote to grant Palestinian membership in UNESCO is no substitute for direct negotiations, but it is deeply damaging to UNESCO," she posted on her Twitter account.

A statement from the foreign ministry in Berlin on Monday said that the decision by UNESCO "will further harm the already difficult indirect talks" led by the Middle East Quartet of the United Nations, the United States, the European Union, and Russia.

Opinion: UNESCO decision a small, albeit costly, victory for Palestine

Despite opposition from the US, Palestine has been accepted as a full member by UNESCO. On Monday, 107 members voted in favor, 14 voted against and 52 abstained. It was the right decision says DW's Bettina Marx. (01.11.2011)

'No shortcut' to peace in Middle East, says Obama

Welcomed with great applause, US President Barack Obama addressed the UN General Assembly in New York. His speech focused on the pursuit of peace in an imperfect world and the Palestinian bid for statehood. (21.09.2011)