US Missile Shield Gains Popular Support in Poland | Europe| News and current affairs from around the continent | DW | 18.08.2008

Russia's conflict with Georgia has caused a swing in public opinion in Poland over hosting US missile interceptors on Polish soil, according to a new poll. 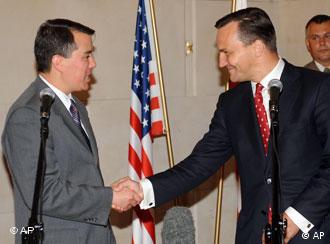 Fifty-eight percent of Poles canvassed said they now supported the Pentagon's plan to base 10 missile interceptors in Poland, while 46 percent were against the scheme.

The poll, conducted by Rzeczpospolita newspaper, said 45 percent of respondents expected Poland's security to be strengthened by the missile shield. Thirty percent, however, believed it would be weakened.

US and Polish diplomats came to an agreement over the anti-missile deal last week. Under the pact, Poland is to receive Patriot air defense missiles and a special pledge of US military cooperation in the case of threats against Poland.

Polish Foreign Minister Radoslaw Sikorski and US Secretary of State Condoleezza Rice are to sign the deal Wednesday in Warsaw.

In early July, a similar poll found 53 percent of Poles opposed the missile shield, part of a planned Pentagon system that also includes a tracking radar in Czech Republic, which was agreed in July.

Parliamentary approval is still required in both countries.

The latest survey was based on interviews of 500 people by pollster GfK Polonia. The margin of error was plus or minus 4.5 percentage points.

The US says the system, designed to destroy incoming ballistic missiles, is intended to defend against growing threats from so-called rogue states such as Iran and North Korea.

Russia, however, vehemently opposes the shield, insisting it is aimed at containing Moscow's arsenal of strategic nuclear missiles -- a charge the US denies.

Rice will travel to Moscow after a US-requested emergency meeting of NATO nations in Brussels to discuss the alliance's reaction to the recent conflict in the Caucasus.

The US-Poland deal "is an important step in our efforts to protect the United States and our European allies from the growing threat posed by the proliferation of ballistic missiles," US State Department spokesman Sean McCormack said Sunday.

Poland and the United States have reached agreement on stationing 10 interceptor missiles on Polish soil as part of an American missile defense system, according to Polish Prime Minister Tusk. (14.08.2008)

Polish Prime Minister Donald Tusk on Monday removed his country's top negotiator in missile-shield talks with the US, highlighting political infighting over the stalled project. (11.08.2008)