US forces 'assisting' Philippines in battle to end city siege

US special forces are "assisting" Philippine troops against Islamist militants on Mindanao, the US embassy says. The two-week siege has left the city of Marawi devastated. Militants are still reportedly holding hostages. 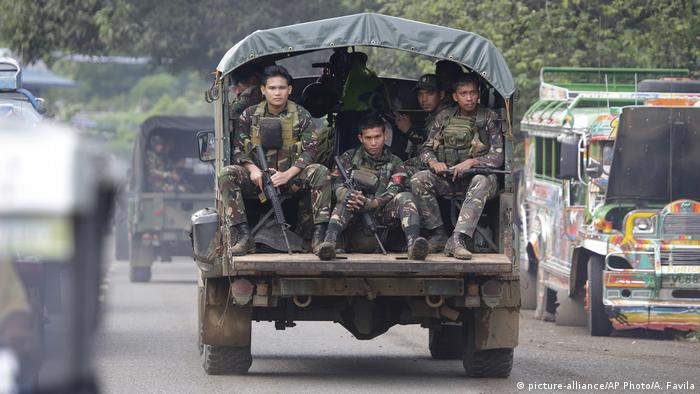 Philippines President Duterte has called on militants in Marawi to abandon their hostilities and start a dialogue. Foreigners are among the Islamist gunmen battling security forces in the southern city. (26.05.2017)

A botched airstrike operation in the southern Philippines has killed at least 10 soldiers. Military forces have been fighting the Islamist Maute group in Marawi city, after militants laid siege to the city last week. (01.06.2017)

Islamist militants seized a Catholic priest and a dozen churchgoers after clashes erupted in the city of Marawi in the southern Philippines. President Duterte said he may impose martial law across the whole country. (24.05.2017)

The US embassy in Manila and the Philippine military were quoted by the Reuters news agency Saturday as saying that US special operations forces were "assisting" in Marawi where 200,000 residents have been displaced by urban battles.

Philippine military spokesman Lieutenant Colonel Jo-Ar Herrera said US personnel were "just providing technical support" and not fighting. That followed sightings on Friday of a US P3 Orion surveillance aircraft over Marawi.

In a televised press conference earlier on Saturday, Herrera said that 13 Philippine marines had been killed in battles with some 200 insurgents allied to the "Islamic State" (IS) militant group.

There were "strong indications," he added, that two militant leaders might also have been killed.

On Friday, airstrikes by the Philippine military targeted buildings in three districts of Marawi, where the insurgents were reportedly holding around 100 hostages, including a Catholic priest.

The marines' deaths added to an overall two-week death tollput at 204. The army listed 21 civilians, 138 militants and 45 police and soldiers killed.

Police said one of the latest fatalities was a 15-year-old boy killed by a stray bullet attributed to a militant sniper while praying inside a mosque.

The Agence France-Presse news agency reported the military as saying that the militants occupied about 10 percent of the city and were using bomb-proof tunnels and anti-tank weapons.

US military involvement on the island of Mindanao, 800 kilometers (497 miles) south of Manila, would mark a turn in strains exemplified by President Rodrigo Duterte's past pledges to expel US troops after decades of cooperation.

Washington deployed special forces soldiers to Mindanao in 2002 to train and advise Philippine units then fighting Abu Sayyaf militants. Although the US has no permanent presence in the country, Washington has maintained 50 to 100 soldiers in the south of the country on rotational drills.