Florida governor Ron DeSantis has vowed to prevent a "catastrophic flood" near the major city of Tampa. A leaking toxic wastewater reservoir has the potential to cause an environmental crisis in the region. 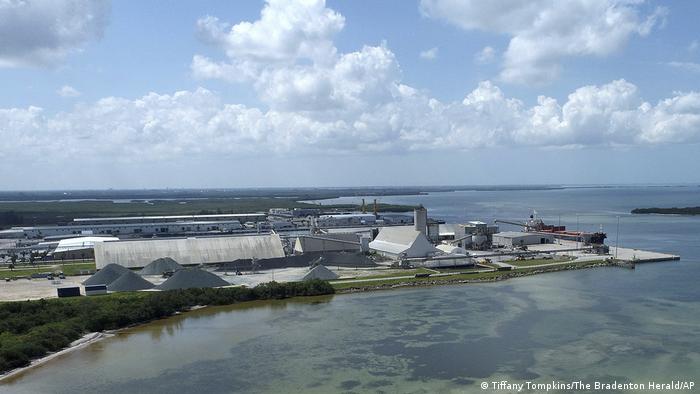 The old Piney Point phosphate mine, where a large pond could potentially release massive amounts of toxic water into the Tampa area.

Florida Governor Ron DeSantis said Sunday his administration is working urgently to prevent a "catastrophic flood" near the major city of Tampa, following the leak of a toxic wastewater reservoir in the region. The pond at the Piney Point phosphate plant in central Florida could potentially release 340 million gallons (1.3 billion liters) of toxic water within minutes, threatening nearby homes and causing a potential environmental crisis in the area.

"What we are looking at now is trying to prevent and respond to, if need be, a real catastrophic flood situation," DeSantis said during a press conference, after surveying the site by air. The Florida governor declared a state of emergency on Saturday for Manatee County, where the plant is located.

How are local officials describing the situation?
Watch video 01:34

Manatee County Administrator Scott Hopes said this week the reservoir holds "waste less conducive to life on land… and in sea." Manatee County officials had ordered the evacuation of around 300 homes in the area on Saturday, due to "further collapse of phosphogypsum stacks."

Phosphogypsum is a byproduct of fertilizer from phosphate rock, and is considered to be weakly radioactive.

Why is the reservoir leaking?

"For more than 50 years, this central Florida mining operation has caused numerous human health and environmental disasters and incidents," she wrote DeSantis in a letter about the Piney Point plant, which was originally constructed by Borden Chemical Company in 1966.

In 1989, thousands of gallons of sulfuric acid leaked from a holding tank at the plant, forcing hundreds of people to be evacuated from the area. In 1991, air releases of sulfur dioxide and sulfur trioxide from the facility sickened over 30 people near the plant.