The US State Department has expelled two Venezuelan diplomats after Caracas sent home two representatives of Washington. Venezuela's initial move came in response to new US sanctions on the country. 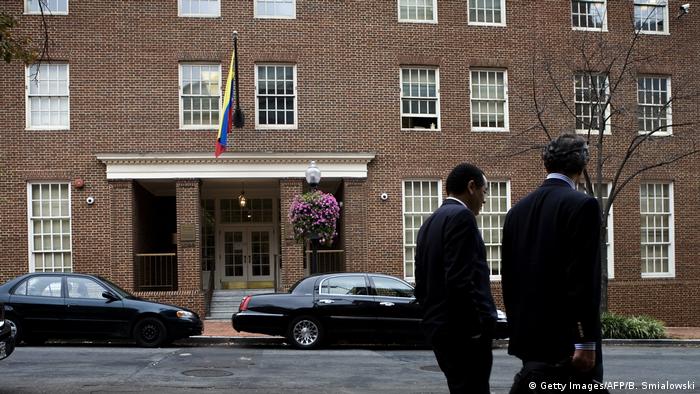 Embassy of Venezuela in Washington, D.C.

The United States on Wednesday ordered two senior Venezuelan diplomats to leave the country within 48 hours in retaliation to Venezuela's expulsion of two US diplomats a day earlier.

"This action is to reciprocate the Maduro regime's decision to declare the Charge d'Affaires and Deputy Chief of Mission of the US Embassy in Caracas personae non grata," State Department spokeswoman Heather Nauert said.

On Tuesday, Venezuelan President Nicolas Maduro accused the US Charge d'Affaires, Todd Robinson, of a "military conspiracy" against Caracas, a charge Robinson and the State Department have denied.

The tit-for-tat expulsions were prompted by the US strengthening sanctions against the Venezuelan government in response to President Nicolas Maduro's controversial re-election on Sunday.

The US, the EU and several Latin American countries dismissed the vote, which many opposition parties boycotted, as neither free nor fair. The new US sanctions restrict the government from selling state assets.

Under Maduro, oil-rich Venezuela has experienced a severe political and economic crisis at home and growing isolation abroad.