The US Defense Secretary Jim Mattis has distanced himself from remarks made by President Donald Trump about Iraq's oil. Mattis also indicated support for Iraqis who served with US troops to be spared Trump's travel ban. 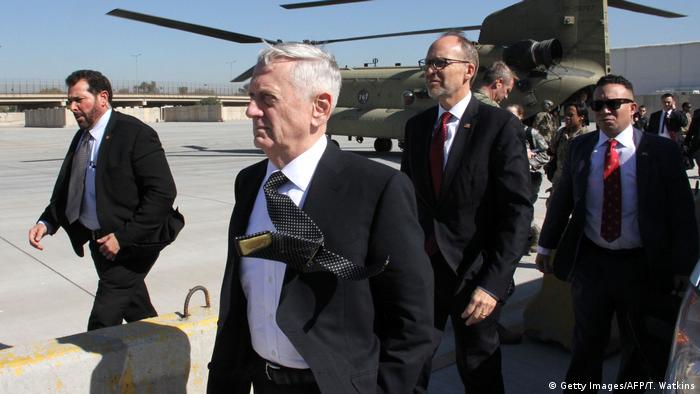 Arriving in Baghdad on an unannounced visit Monday, Mattis had planned to assess for himself the effort by US-backed Iraqi forces to expel "Islamic State" (IS) militants from their stronghold of western Mosul.

But he began by downplaying comments made by President Donald Trump, who suggested the US should have seized Iraq's oil after invading the country and removing Saddam Hussein in 2003. According to Trump that would've helped fund the US war effort and deprived IS of a key source of funds.

Trump brought up the issue during the campaign and told CIA staff in January: "We should have kept the oil. But okay. Maybe you'll have another chance." Trump did not elaborate on what he meant by "another chance."

But Mattis, a retired Marine who had commanded troops during the invasion of Iraq, distanced himself from Trump's statement.

"All of us in America have generally paid for gas and oil all along, and I am sure that we will continue to do so in the future," Mattis told reporters. "We are not in Iraq to seize anybody's oil," he said.

On Sunday, Iraq reported proven oil reserves of 153 billion barrels, the fifth largest in the world behind Venezuela, Saudi Arabia, Canada and Iran.

Mattis was also expected to face questions from Iraqi leaders about Trump's stalled executive order temporarily barring Iraqi citizens, as well as people from six other Muslim-majority countries, from entering the US.

He has sought an exemption from the ban for Iraqis who had served with US troops, but had not yet seen a new executive order which the administration was considering.

"I right now am assured that we will take steps to allow those who have fought alongside us, for example, to be allowed into the United States," Mattis said.

Mattis has stuck closer to established US foreign policy than Trump, including emphasizing support for the NATO alliance and having a less favorable view of Russia and President Vladimir Putin.

Mattis also said he had no problems with the press, after Trump labeled the media "the enemy of the American people."