US cuts embassy staff in Cuba over 'specific attacks'

The United States is withdrawing more than half of its diplomatic staff from its embassy in Cuba after mysterious health "attacks" on US personnel. The Cuban government criticized the "hasty" decision. 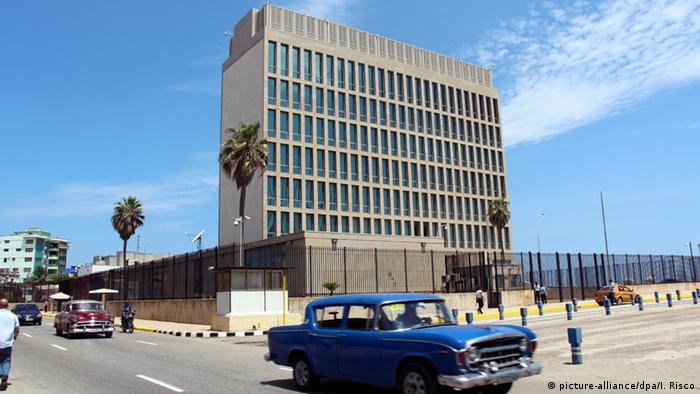 The embassy in Havana will lose around 60 percent of its US staff and stop issuing visas indefinitely, a US official said Friday.

The dramatic steps follow a number of "specific" health attacks on US embassy staff in recent months. The incidents appear to have harmed a total of 21 diplomats, who suffered symptoms including "hearing loss, balance problems, visual complaints, headache, fatigue, cognition issues and difficulty sleeping," the official said. Some of the targeted individuals had injuries as serious as traumatic brain injury and damage to the nervous system.

US investigators looking into their cases are still at a loss to explain who or what was responsible. Although the US State Department has always referred to them as "incidents," officials said, authorities had now determined they were "specific attacks" targeting American personnel.

Initial media reports suggested some kind of "sonic" technology may be to blame, but no such device was ever found at locations where the incidents occurred. Differing symptoms from victim to victim also baffled investigators.

The head of North American affairs at Cuba's foreign ministry, Josefina Vidal, criticized the US decision to withdraw some of its diplomats. "We consider the decision announced by the US government today, through the State Department, to be hasty, and it will affect bilateral relations," she said.

Vidal added, however, that Cuba was still willing to cooperate with the US government as it investigates the attacks.

While Washington has stressed that Havana is responsible for the safety of foreign envoys on its soil, it has not blamed Cuba for staging the attacks.

According to US officials, Washington will no longer send official delegations to Cuba or conduct bilateral meetings on the island. Instead, any talks will be held in the United States.

The decision is a significant setback for US-Cuba ties at a time when their historically troubled relationship had only just started to mend. Former US President Barack Obama reestablished diplomatic ties with Cuba in 2014 after more than 50 years of political estrangement.

Barack Obama's government has warned Donald Trump's executive that reversing the warming of relations with Cuba would be "incredibly damaging" for the US and Cuba. Until 2014, diplomatic ties had been broken since 1961. (14.12.2016)