US, China COVID recovery dwarfs all others | Business | Economy and finance news from a German perspective | DW | 05.01.2022

US, China COVID recovery dwarfs all others

As economies around the world rebound from the COVID-19 pandemic, the two main superpowers are racing ahead. DW gives a snapshot of who benefits most from record-high global GDP worth $94 trillion. 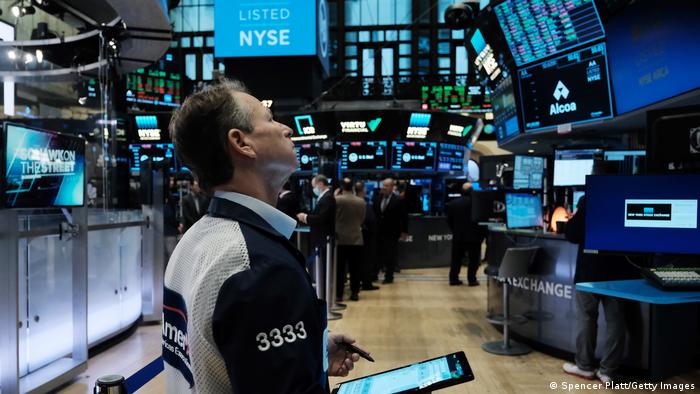 Fresh data shows the rebound from the COVID-19 is uneven, with China and the US taking the lead

The world's two largest economies, China and the United States, have already surpassed their pre-pandemic highs, according to one key measure, helping to power the global recovery from COVID-19.

The Chinese economy is projected to have grown 10.6% larger for the whole of 2021, compared with 2019, the year the coronavirus first emerged in Wuhan.

The data from the Organization for Economic Co-operation and Development, published in December, showed that Chinese gross domestic product (GDP) was on course to hit $15.66 trillion (€13.84 trillion) versus $14.15 trillion in 2019.

During the same period, US GDP is estimated to have grown 2% and is now worth $20.3 trillion.

However, even for the world's most wealthy nations, the post-pandemic recovery remains uneven. 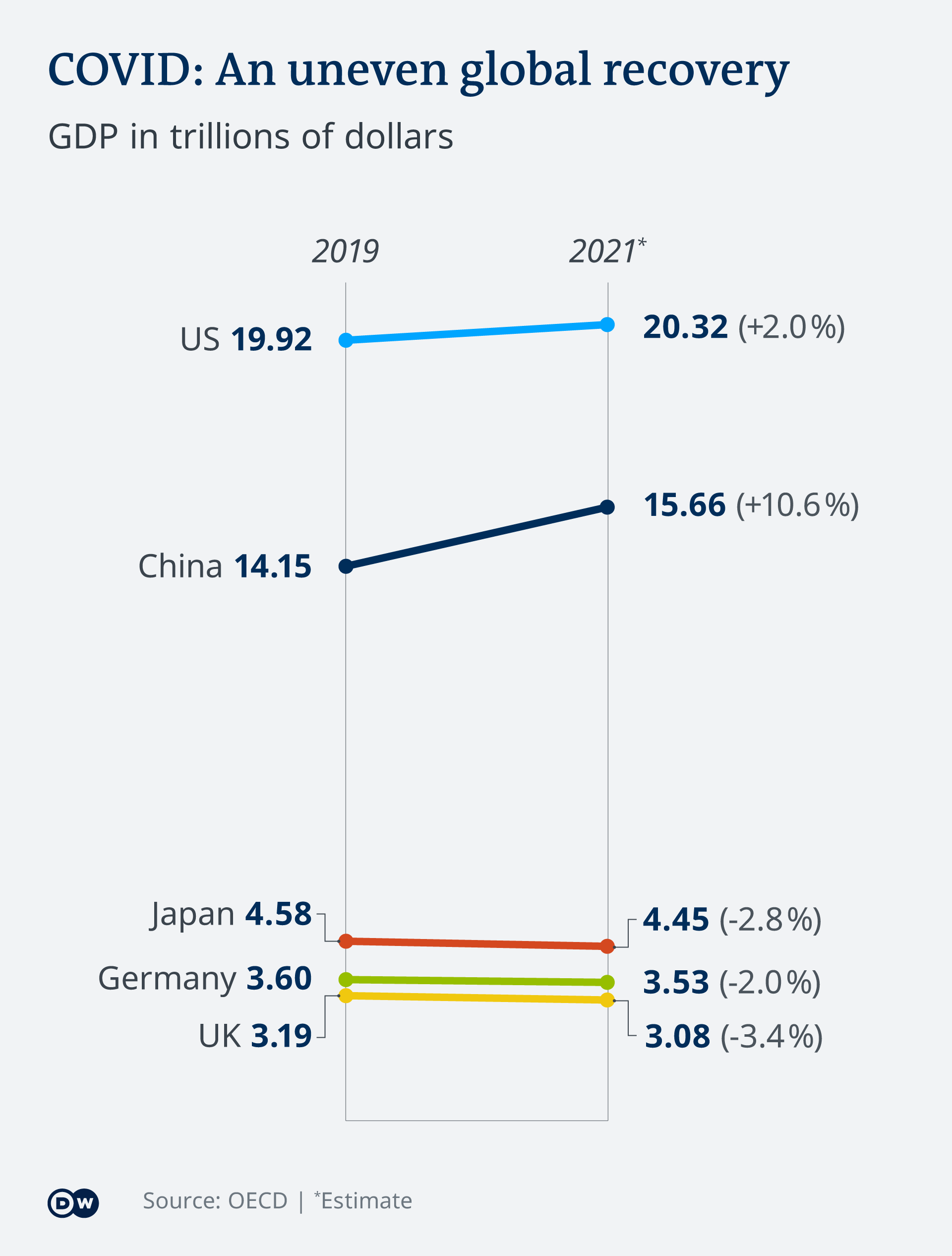 Japan, Germany and the United Kingdom — the three other top five global economies— have yet to fully rebound from the health emergency.

Major supply chain disruption is hampering the German and Japanese recoveries, delaying shipments of raw materials and other goods around the world. The automotive sector has been hit particularly hard.

Britain's economy has also taken a blow from the shipping and other logistics delays, which compounded the effects of the country's departure from the European Union.

All three countries' economies will have surpassed their pre-coronavirus highs by the end of 2022, the Organization for Economic Co-operation and Development projections show.

How big a hit did the world take?

After the first lockdowns brought economies to a halt, data from the Organization for Economic Co-operation and Development suggest total global GDP fell 9.7% within the space of just six months.

It took six quarters for total world GDP to fully recover and surpass its previous high.

The total monetary value of global trade and services is now $94 trillion, according to the International Monetary Fund, and is predicted to rise by a tenth by the end of 2023.

The global recovery is heavily reliant on the fortunes of the world's top two economies. Between them, the US and China make up 35% of global GDP, according to the Organization for Economic Co-operation and Development. 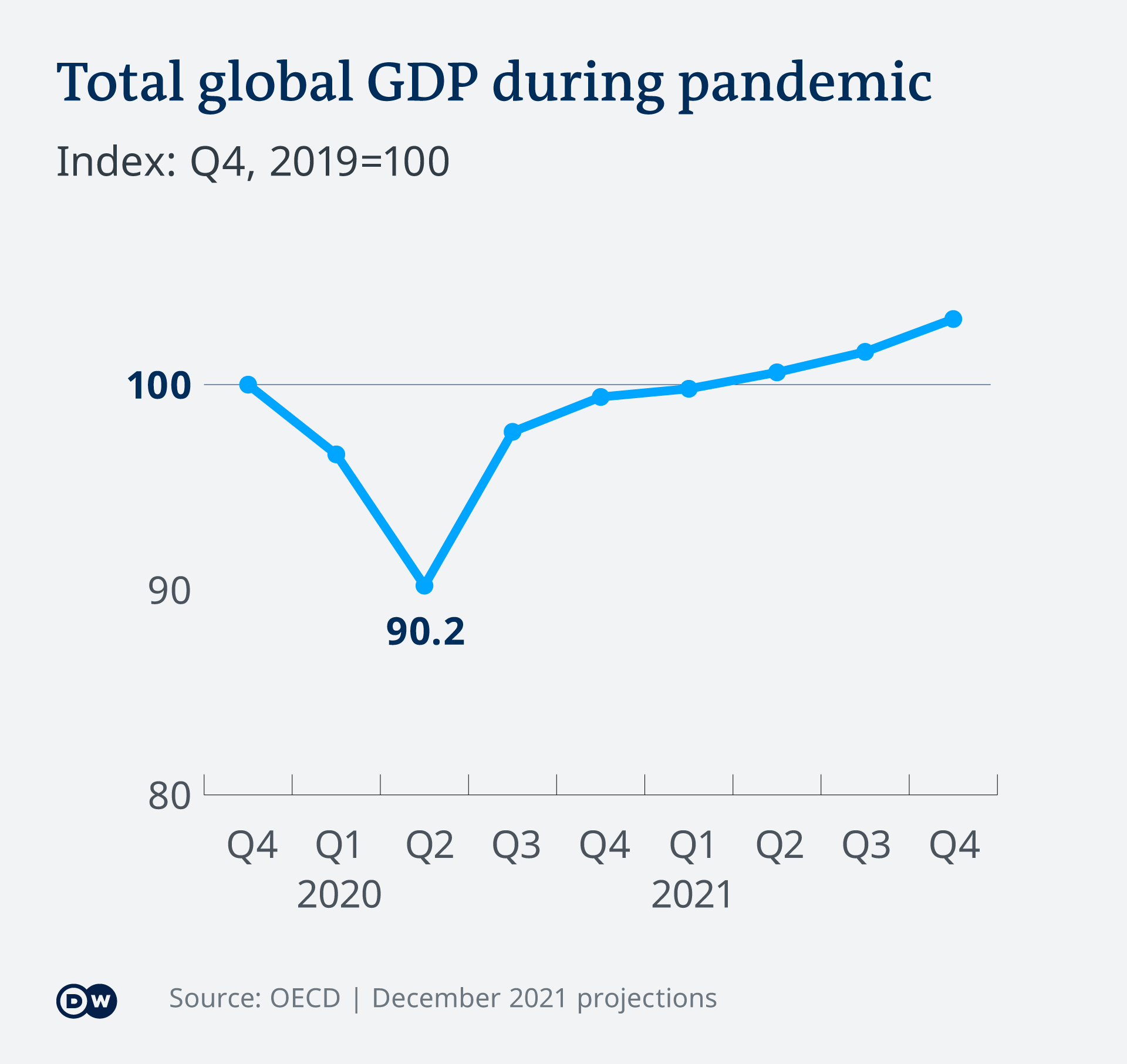 Manufacturing, construction and mining are among China's biggest industries, while the US wealth is built through the finance, insurance and real estate sectors, along with professional and business services.

The world's five biggest economies now account for more than half of all global GDP, according to separate data from the International Monetary Fund.

A closer look at the fund's estimates before Christmas by the Visual Capitalist website showed that the US GDP alone is greater than the combined GDP of 170 countries.

Swiss economist Dina Pomeranz noted on Twitter that France, a country of 65 million, has a similar GDP to the whole of Africa, with its population of 1.4 billion.

Visual Capitalist revealed that the fastest-growing economy in 2021 was Libya — estimated to record an incredible 123.2% growth rate as a result of the rebounding oil price.

Guyana in South America was set to achieve more than a 20% growth rate thanks to the discovery of major crude oil reserves off the Atlantic coast in 2015, which began production more than two years ago.

The semiautonomous Chinese territory of Macau is also set for a similar growth rate after its gaming sector recovered as mainland tourists returned. However, the Macau economy could still take a hit due to China's strict measures to contain new COVID outbreaks on the mainland.

Other countries set to record more than 20% growth in 2021 are the Maldives and Ireland due to recovering tourism for the former and because the latter is home to the world's biggest tech corporations, who have announced bumper profits.

By comparison, China and the US were expected to grow around 8% and 6% respectively last year.

By the end of 2021, the global economy was around thirty times larger than fifty years ago and is expected to double again by 2050 to reach $180 trillion.