US charges former Guatemalan VP and minister with drug trafficking

Guatemala's former vice president and an ex-interior minister have been charged with conspiring to distribute cocaine in the United States. The two are already facing corruption charges in their home country. 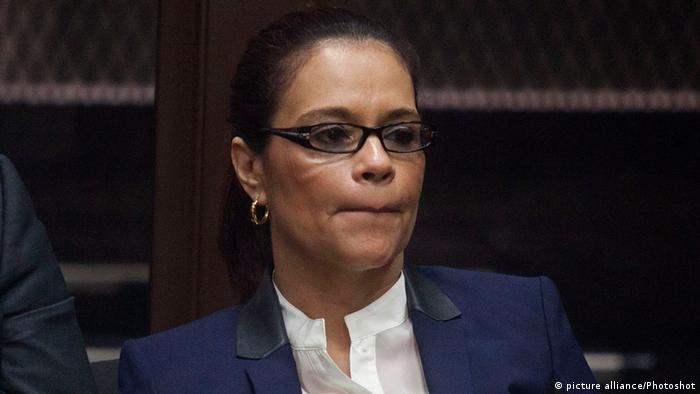 Washington will seek the extradition of ex-Guatemalan Vice President Roxana Baldetti (pictured above) and former Guatemalan Interior Minister Hector Mauricio Lopez Bonilla on drug trafficking charges, the US embassy in Guatemala announced in a statement on Friday.

Baldetti and Lopez Bonilla face charges for conspiracy to import five kilograms (11 pounds) or more of cocaine in the United States between 2010 and 2015, the statement said.

The former vice president is already facing legal troubles at home after resigning from her post in 2015 and being formally charged for corruption last year.

Her attorney, Gustavo Juarez, said they were not previously notified of the US allegations.

"The legal [process] is that she finishes her cases in Guatemala and later if approved she is extradited, even though she could also decide to be extradited and not fight it," Juarez said. He added that he will visit Baldetti in prison to inform her of the new charges.

Baldetti has been in custody for allowing a benefiting from an alleged customs graft scheme that defrauded Guatemala millions of dollars. Within the customs scheme, companies allegedly paid bribes to avoid customs duties.

The former vice president is accused of receiving $38 million (35.9 million euros) in kickbacks from at least 70 public works projects between 2009 and 2015. Baldetti has denied all accusations.

Lopez Bonilla served as the strong man in the administration of former President Otto Perez Molinawho held office from 2012 until his resignation in 2015. Perez Molina has also remained in custody on graft charges since stepping down.

Women on Waves is an organization that tries to help women in the early stages of pregnancy who have difficulty accessing abortion. In Guatemala, abortion is only legal if the mother's life is in danger. (24.02.2017)

Coronavirus digest: US lifts travel bans on EU, UK and Brazil 5m ago