For German authors, cracking the US book market is a hard task. So when children's book writer Rotraut Susanne Berner got a call from a US publisher, she was happy -- until she heard what would have to be changed. 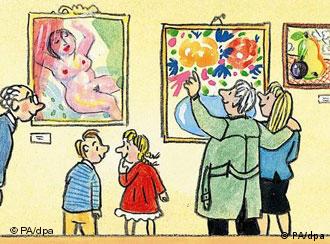 Avert your eyes, children of the United States!

German children's book author Rotraut Susanne Berner was delighted when her latest worldwide success story, the newest of her "Wimmelbücher" series, was courted by a publisher in the notoriously fickle US book market.

However, after celebrating the fact that a German book had been noticed by the normally indifferent American publishing industry, Berner's happiness turned to consternation when she discovered just how fickle the industry could be.

Of course, said publishers, Boyds Mills Press, there would be some cultural differences that would have to be addressed and possibly changed, which Berner herself was happy to consider. The publishers suggested that the inclusion of some smokers in the brightly colored illustrations would not be suitable for US children, and Berner agreed. 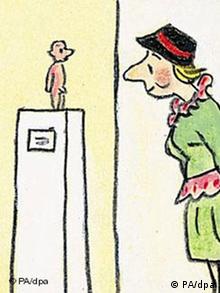 But when the publishers began suggesting censorship of naked artworks in the background of a museum scene, the German author couldn't believe what she was hearing.

"It was a sensation to start with," said Berner of her amazement at attracting US interest, in an interview with the German Der Spiegel news magazine. But when the suggestions for edits and exclusions started to flood in over the nude paintings and sculpture, she thought it was a joke. 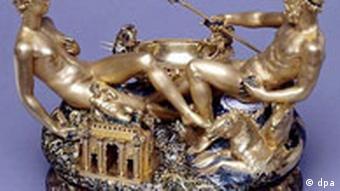 Is this 50 million euro artwork from the 16th century obscene?

On the page, the sculpture stands at a very unthreatening seven millimeters tall and the appendage could, at first glance, be dismissed as a wayward brushstroke. The "little willy" as Berner called it "was barely half a millimeter in length." The sculpture is an aside in the overall museum scene and is in no way prominent to the storyline on that page, she added.

Yet, the censors spotted it and wanted it out. It seemed that the whole micro-penis affair is "highly embarrassing" to the publishing company, according to Berner, which fears a backlash from angry parents if the book is published with the tiny organ still in place.

While Berner admitted that she could have lived with the offending artworks being covered by a black box or bar in the book, the author and graphic arts designer said that she could not agree to a complete reworking of the page and the omission of the artifacts. Instead, she pulled the plug on the US deal.

The contract would have been a sweet one, but Berner need not worry. Her books are sold all over the world and she has racked up best-sellers in 13 countries from Japan to the Faroe Islands. No one, other than the Americans, has complained about the nudity, she said.

And so, the Munich-based author continues her successful career with her principles intact and the innocence of the children of the United States spared. At least until the next class trip to a museum.

What Made You Chuckle?

Germans might have a reputation of being a little grim and glum, but they're not all sourpusses. They can laugh or be laughable at times, and you can chuckle right along. Read up on the farcical side of Germany. (10.07.2007)