Legislation to temporarily raise borrowing by amost half a trillion dollars avoids the threat of an unprecedented default that could have wreaked havoc on the global economy. 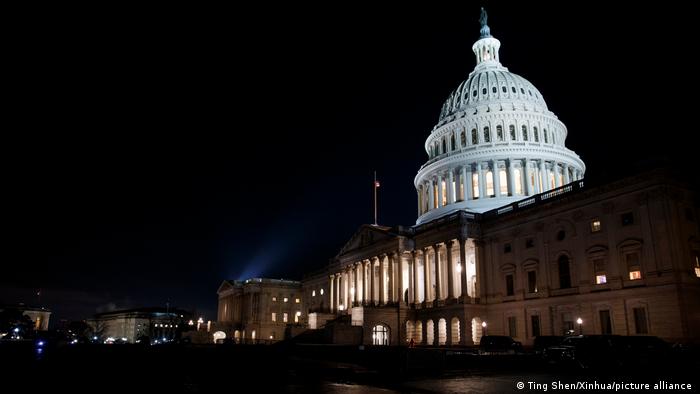 The US Senate on Thursday voted to extend the country's debt limit by $480 billion (€415.3 billion).

The narrow 50-48 vote to pass the bill ends weeks of partisan fighting.

"Republicans played a dangerous and risky partisan game and I am glad that their brinksmanship did not work," Senate Majority Leader Chuck Schumer said following the vote.

How significant is the debt ceiling raise?

It staves off the short-term threat of the US being unable to borrow money or pay off loans for the first time ever.

That potential historic default in an estimated 11 days' time would have had serious repercussions for the world economy.

The increase, which would lift the debt ceiling to a $28.9 trillion limit, is expected to be exhausted on the day of another major funding deadline.

Under a pro tem measure passed earlier this month, the funding for most federal programs is set to expire on December 3 — when the government's coffers theoretically run dry, closing federal services and properties and crippling much of Washington and beyond.

The Democrat-Republican standoff on the debt ceiling

The plan came after Republican Senate Minority leader Mitch McConnell on Wednesday backed a short-term extension of the government's borrowing authority after leading GOP opposition to a longer extension.

The offer followed President Joe Biden's statement that changing the Senate's filibuster rules —  which require 60 of the 100 members to agree on most legislation —  was a "real possibility."

Not all Republicans supported McConnell's move and it took long, closed-door talks to garner enough Republican votes to advance the measure.

"We are ready to work with them."

The bill — which passed the Senate along party lines with no Republican support — still has to be rubber-stamped by the House of Representatives.

The House is expected to approve the debt ceiling bill and send it to Biden's desk by next week.