The US will support a proposal to waive IP protections for coronavirus vaccines, Washington's top trade official has said. More than 100 countries want the temporary suspension of patents on COVID-19 vaccines. 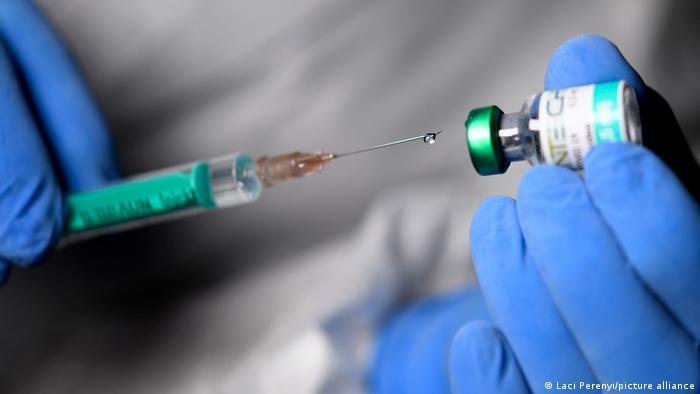 The US will support a proposal to waive IP protections for coronavirus vaccines, US Trade Ambassador Katherine Tai announced on Wednesday.

"This is a global health crisis, and the extraordinary circumstances of the COVID-19 pandemic call for extraordinary measures," she wrote in a statement. "The administration believes strongly in intellectual property protections, but in service of ending this pandemic, supports the waiver of those protections for COVID-19 vaccines."

She said the US would participate in negotiations at the World Trade Organization (WTO), but that this could take some time to resolve.

"The administration's aim is to get as many safe and effective vaccines to as many people as fast as possible. As our vaccine supply for the American people is secured, the administration will continue to ramp up its efforts — including working with the private sector and all possible partners — to expand vaccine manufacturing and distribution. It will also work to increase the raw materials needed to produce those vaccines."

What is the proposal?

Many countries want the lifting of patents, copyrights, and protections for industrial design and confidential information related to COVID-19 vaccines. They are calling for suspension of such protections for several years to help speed up vaccine production.

The idea of waiving intellectual property rights for COVID-19 vaccines has wide support among the developing world, as countries struggle to secure enough doses to inoculate their citizens. Meanwhile rich nations such as the US have been accused of hoarding vaccine supplies.

How have major figures reacted to the US announcement?

Both international and domestic US leaders praised the move by Biden.

WHO Director-General Tedros Adhanom Ghebreyesus called the Biden administration's decision to support the waiver proposal a "monumental moment in the fight against COVID-19." Ghebreyesus backs the initiative, saying that such waivers are within the powers of the WTO and that it is the perfect time to use them.

"Bold move and the right move," USAID Administrator Samantha Power said. "Waiving IP protections for COVID-19 vaccines will ensure we get them out to the world sooner and stop future outbreaks and new variants before they rise."

Who opposes the waivers?

The proposal has faced stiff opposition from countries with powerful pharmaceutical and biotech industries. They say that such a waiver would not provide the relief that people hope, as vaccine production is a complex procedure that cannot be ramped up simply by lifting protections, which could have an impact on future innovation.

The problem with patents

WTO member countries will soon present and negotiate a text on the matter. Ambassadors at the WTO's General Council have been debating the idea, first raised by India and South Africa in October.

A WTO panel on intellectual property will debate the matter later this month, before a formal meeting on June 8 and 9.

More than 100 countries say they support the proposal.

India is struggling to contain a surge in coronavirus cases with global record-high infection and death rates. Prime Minister Narendra Modi says a "storm has shaken the nation."