US and Afghanistan nearing deal on bilateral security pact

US Secretary of State Kerry and Afghan President Karzai have agreed in principle on a security deal on the future of American forces in Afghanistan. The deal must still be approved by tribal elders. 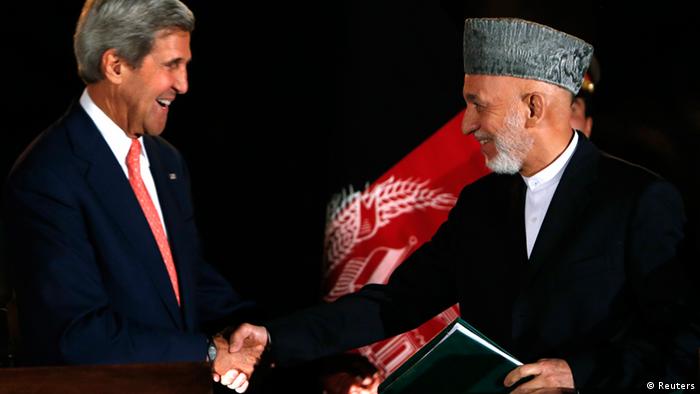 The pact was announced jointly by John Kerry (pictured l. above) and President Hamid Karzai late on Saturday following two days of talks in the Afghan capital, Kabul.

The deal would keep some US forces in Afghanistan after most foreign troops withdraw by the end of next year.

Both men said an agreement had been reached on a series of issues that had deadlocked talks in the past year. These included some sovereignty issues and the question of the safety of Afghan citizens at the hands of American and allied troops.

However, US officials said the issue of jurisdiction over the US troops who remain is still a sticking point.

The US has demanded that it retain jurisdiction over its troops, making them immune from Afghan law. Karzai opposes this and says he will put the matter before the Loya Jirga - a traditional Afghan assembly of elders, leaders and other influential people - for consideration.

The opinion of the Loya Jirga would then be given to the Afghan parliament, which would take the final decision.

Kerry said that "unfortunately there cannot be a bilateral security agreement" without the issue of jurisdiction being resolved.

A similar security agreement between the US and Iraq in 2011 collapsed over the issue of troop immunity, and the US pulled its troops out of the country, which has since seen another surge in sectarian violence comparable with that in 2008.

Afghans throw their names in for presidency

Hamid Karzai will have to clean out his desk in Afghanistan's presidential palace in early 2014. A total of 27 candidates are running for his post, but it is not likely that all of them will stay in the race. (08.10.2013)

There are currently an estimated 87,000 international troops in Afghanistan, including some 52,000 Americans. That number will be halved by February, and all foreign combat troops are scheduled to leave by the end of 2014.

If no agreement is signed, all US troops would have to leave by December 31, 2014.