President Jose Mujica's 1987 VW Beetle, in Uruguayan sky blue, has become a symbol of his intentionally austere lifestyle. An Arab sheikh has reportedly offered well over the trade-in value for the cult car. 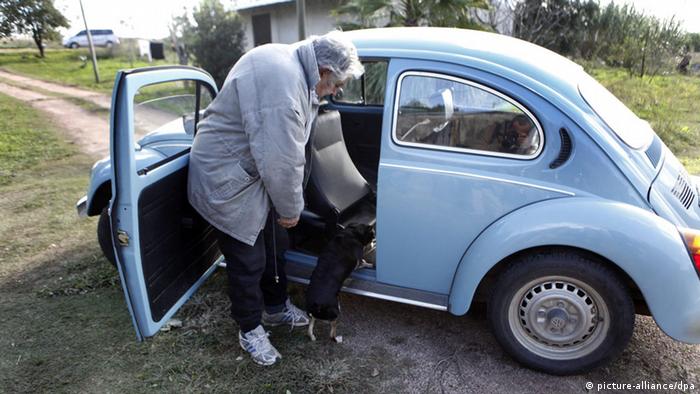 The market value for used cars, especially aging ones that begin to regain value as classics, can be difficult to pinpoint, but very few 1987 Volkswagen Beetles could ever fetch $1 million (807,000 euros), anywhere in the world.

Uruguayan weekly paper "Busqueda" reported that President Jose Mujica's sky-blue VW Bug is an exception to this rule, reporting that the president had received several international offers. Once nicknamed "the poorest president on earth" because of his demonstrative efforts to live on modest means, Mujica's Beetle became a symbol of the leftist leader's personal austerity.

After "Busqueda" reported that an Arab sheikh offered $1 million for the car during the G77 summit in Bolivia this June, the president told a news conference in Montevideo: "That's what they said to me, but I didn't give it any importance."

Mexico's ambassador to Uruguay, Felipe Enriquez, recently suggested at an informal chat that Mujica could fetch a great return for the car at auction. He said he would be willing to swap 10 four-wheel drive pickups for the blue Bug, telling Busqueda that he made the offer as a "profound admirer of President Mujica, his heritage, his human values, his real solidarity with those most in need, to whom he gives most of his salary as head of state."

'No commitment to cars'

Mujica told reporters that if he were to receive $1 million for the Beetle, he would donate it to a charity he supports that provides housing to the homeless. If the offer of vehicles in exchange for the Bug were to win out, Mujica said they could go to the public health office or his campaign workers.

Having "no commitment to cars," the 79-year-old said he would gladly sell the car at auction, but acknowledged that he understood why others might pay an inflated price: "Human beings have a bit of fetishism; we need certain material symbols." He likened it to two of his prized possessions with no real worldly value, a hammer and shovel that belonged to his father. "They are little things to the world, but are worth a lot to you."

On assuming the presidency in 2010, Mujica famously declared that it was effectively all his worldly wealth. The flower farm he lives on was in his wife's name at the time. He donates around 20 percent of his total monthly income, now declared at around $11,000 per month including the farm's revenue, to his political movement.

Mujica, nicknamed "Pepe," has also made headlines during his term for legalizing marijuana, abortion and gay marriage. He cannot stand for re-election, owing to a constitutional ban on presidents serving back-to-back terms. His successor will be decided in a runoff election on November 30.