Uruguay coach Oscar Tabarez has hit out at FIFA's decision to ban striker Luis Suarez for biting an Italian player. He has said he'll step down from the strategic committee of world football's governing body in protest. 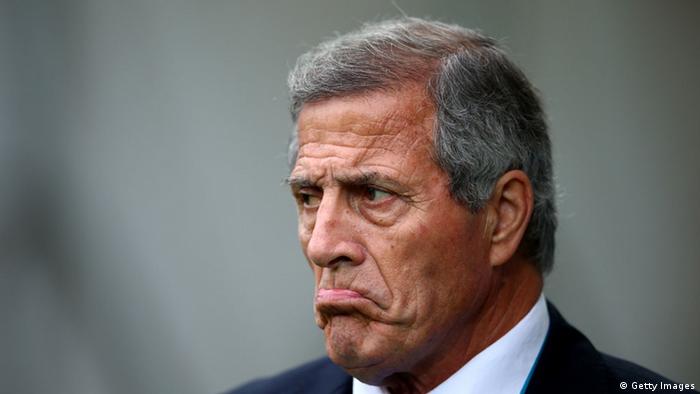 Tabarez said on Friday that Suarez had been made a "scapegoat" for biting Italy defender Giorgio Chiellini at the World Cup, and slammed the "excessive severity" of the player's four-month ban. Instead of discussing Uruguay's upcoming Round of 16 match against Colombia on Saturday, Tabarez used the mandatory pre-match press conference to hit out at FIFA and the English-language media for creating the pressure that led to Suarez's ban.

"Many times you forget that the scapegoat is a person, who has rights," Tabarez said while reading out a prepared statement. "In this particular case of Luis Suarez, despite the faults he may have committed, he has made significant contributions to football from the pitch."

Suarez was banned for nine international games and suspended from all football-related activity for four months by FIFA on Thursday after biting the shoulder of Chiellini during a Group D game in Natal on Tuesday. It is the third time he has been punished for biting a player on the field after previous incidents while playing in the Netherlands and England.

Tabarez refused to answer questions during the press conference in Rio de Janeiro. He was given a round of applause by Uruguayan journalists after reading out his 15-minute statement. He also announced he would be stepping down from his position on FIFA's technical study group and strategic committee.

"It is not wise, at least it is not prudent to be in an organization with people who exerted pressure in order to promote this decision," said Tabarez, adding that those who had punished Suarez had "values that are very different from those that I believe I have."

The FIFA strategic committee is led by FIFA President Sepp Blatter and deals with "global strategies for football and its political, economic and social status." It meets no more than twice a year and has a largely symbolic role in the organization.

Tabarez said Suarez was being made a "scapegoat" and that his staff and players were shocked by the ban, which they never thought would be "of such an excessive severity."

"Who wins, who loses? Who benefits, who is harmed? Who ended up getting this there way," he asked.

"We never thought or expected what we found out when we were told about the details of the punishment - of an excessive severity," Tabarez added. "The decision was much more focused on the opinions of the media, and that media attacked immediately at the conclusion of the match … I don't know what their nationality was, but they all spoke English."

Tabarez ended the press conference with words for Suarez, who returned to Uruguay earlier on Friday, saying the Liverpool forward "will never be alone" in his attempt to get recover from the controversy.

Uruguay striker Luis Suarez is out of the World Cup after FIFA suspended him for nine games for biting an opponent. He was also fined 100,000 Swiss francs and banned from any football-related activity for four months. (26.06.2014)