Massive pillars support the overhanging wooden shingle roof of the stilt house where the village's harvest is stored. Two women sit with their children in a lumbung: a rice barn, that was once seen all across Indonesia and that still exists in some rural places.

Ursula Schulz-Dornburg captured this lumbung through her lens 40 years ago. It is part of her collection of works that focus on the disintegration of landscapes and architecture, and the subsequent loss of social and cultural experiences.

The Düsseldorf-based photographer has traveled extensively. Her photographs, a selection of which Berlin's Aedes Architekturforum is showing in an exhibition titled "Verschwundene Landschaften" (Vanished Landscapes), are a mixture of reportage and documentary photography.

Incidentally the lumbung, which has traditionally been a place of social gathering, was also chosen by the organizers of the next Art Documenta, as a symbol of global networking that reflects contemporary society. Documenta is a contemporary art exhibition, which takes place every five years in the German city of Kassel. 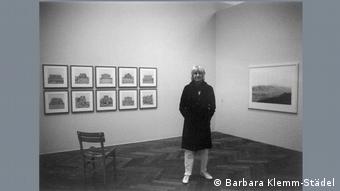 Ursula Schulz-Dornburg has created an impressive body of work

Some of her works have already been exhibited elsewhere, for example, at the Städel Museum in Frankfurt and Museum Ludwig in Cologne. The now 83-year-old Schulz-Dornburg has also published numerous photo books in collaboration with the culture pages of German newspapers.

For the upcoming exhibition, all the photographs of Schulz-Dronburg's travels have been sorted into five sections, and they all share one thing in common: they are about places that no longer exist today. These include her impressions of the marshlands that once thrived at the confluence of the Tigris-Euphrates Rivers, which she photographed in 1980, before they were drained for political and economic reasons, the rock caves of Syrian monks along the Georgian-Azerbaijani border, the Bugis houses in Sulawesi, and her journey from Sanaa to Mar'ib in Yemen. Like her pictures of the lumbung, they bear witness to bygone eras and ways of life.

The exhibition runs from July 17 through September 9, 2021 at Berlin's Aedes Architecture Forum.

Archaeologists have confirmed that a depiction of a wild pig found in a cave on the Indonesian island of Sulawesi is over 45,500 years old.

With his camera, David Seymour captured the plight of children as victims of war. His portraits were also famous. His artistic trademark: expressing sympathy.

London: The Essence of Beauty and Diversity