The Middle Rhine Valley between the cities of Bingen and Koblenz draws hundreds of thousands of tourists annually. Since the early 19th century, travelers have come here for the famous romantic ambience of the Rhine. 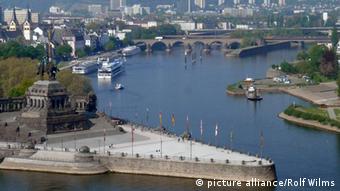 The rise of river cruises made the Rhine River one of the most popular travel destinations in Europe. The riverine landscape with its steep slopes and medieval castles and ruins inspired painters, musicians, and poets of the Romantic era, who made the Rhine a focus of yearning. The winding river valley with its legend-entwined Lorelei rock, terraced vineyards, picturesque towns with half-timbered houses, and many castles make the Middle Rhine Valley a unique cultural landscape that was declared a UNESCO World Heritage Site in 2002. Many of the medieval castles are hotels today. Staying within these venerable walls gives a visitor a feeling for how this landscape inspired the painters of the 19th century.

It's easy to relax in Saarland, far from mass tourism. Michelin-starred cuisine, a Franco-German way of life and the world's first industrial UNESCO World Heritage site are the pride of this small, Francophile state.