Almost 1.4 million children suffering from severe malnutrition could die this year from famine in Nigeria, Somalia, South Sudan and Yemen, the UN children's agency has warned. Famine has been declared in South Sudan.

Fews Net, the famine early warning system, said some remote areas of Nigeria's Borno state had been affected by famine since late last year. Aid agencies have been unable to reach those in need and feared the situation will worsen.

UNICEF director Anthony Lake appealed for quick action. "We can still save many lives," he said.

Drought in Somalia has left 185,000 children on the brink of famine, with this figure expected to reach 270,000 in the next few months.

The UN said on Monday it was "scaling up assistance and protection" in Somalia, as about 6.2 million Somalis, or half the country's population, were in need of humanitarian assistance.

Over 100,000 people are facing starvation in parts of violence-plagued South Sudan,three UN agencies said on Monday as they declared famine in parts of the country.

"A formal famine declaration means people have already started dying of hunger. The situation is the worst hunger catastrophe since fighting erupted more than three years ago," according to a statement by the World Food Programme (WFP), UN children's agency UNICEF and the Food and Agricultural Organisation (FAO).

The drought has also affected food security in the world's youngest nation but the biggest contributor to the famine is the inability of aid agencies to reach areas where the economy has collapsed due to the war.

Over three years of war have left nearly five million people hungry in what aid groups have called a "man-made" tragedy.

Aid agencies said the famine threatens to affect a further one million people in the coming months.

The UN has warned of potential genocide and ethnic cleansing and there is no prospect of peace in sight. 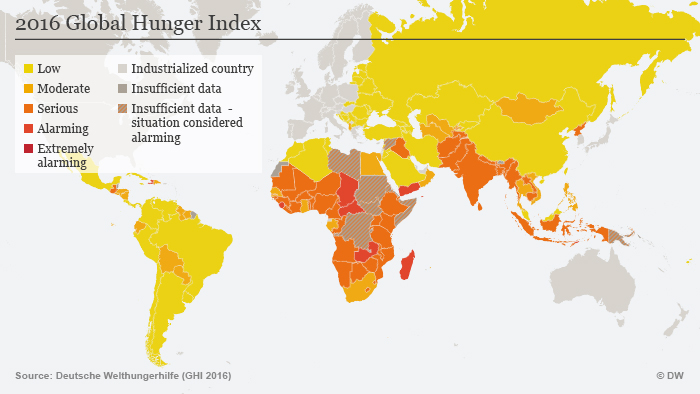 Continued conflict in South Sudan has forced 52,000 people to flee to Uganda in January alone, the UN said. Killings of civilians, rapes and the destruction of homes and property have been reported. (08.02.2017)

New warning of famine in Nigeria