The UN children's agency UNICEF says it has arranged for the demobilization of 3,000 child soldiers by the South Sudan Democratic Army (SSDA) Cobra Faction. 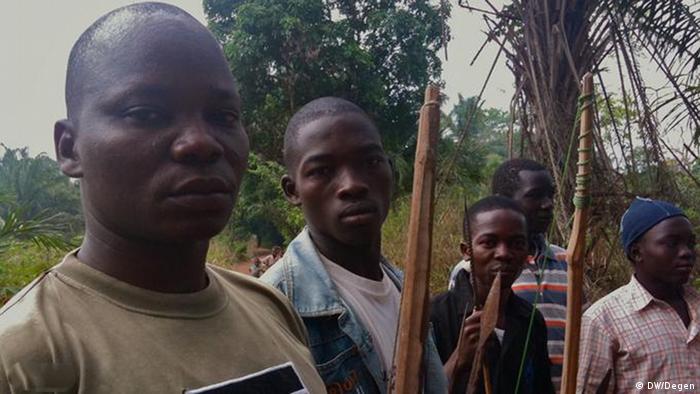 UNICEF has pledged to reunite the children with their families in South Sudan where more than 1 million have been displaced since a civil war broke out in December 2013.

The children were under the commnd of warlord David Yau Yau and based in the Pibor region of Jonglei state.

DW: How many of the 3,000 children have actually been released and what sort of condition are they in ?

John Budd: About 260 children were released yesterday (27.01.2015) and taken into our care. They are all boys. Many of them had been in this armed group for about four years. A lot them had seen very bad fighting . Some of them hadn't seen any fighting and their general condition when we got them was good, although they were very hungry and thirsty.

What will happen to them now?

They were taken to an interim care center that UNICEF has established in the village of Gumuruk and they will be taken care of there. Firstly, they'll be given shelter obviously, food and water. They'll be given a medical examination and provided with any psychosocial support that they require and we will also register them and start the tracing process back to their families and community.

South Sudan has been immersed in a civil war for more than year. Finding their parents is going to be a very difficult task, isn't it?

Yes, it is within a very terrible environment, but in this instance we are positive that we will be able to do our best and get most of these children back into their families. The reason we can say this is that in the interviews we had with the children in the preparation for their release most of them said that they had seen a family member recently. So in this situation it is not a case where the children were used against their communities. They were, in fact, used by the armed group to defend their communities so there is still a remaining attachment.

How widespread is the use of child soldiers in the current conflict in South Sudan?

Our figures have just over 12,000 children in the various factions being used as soldiers.

Are they fighting for both government and rebel forces?

Both. The government SPLA forces have given us an assurance that that it is their intention to reduce the number of children to zero in their forces. We have also called on the opposition forces to do likewise.

How hopeful are you that those remaining child soldiers will be released soon ?

Within the David Yau Yau Cobra faction, we are hopeful that all those children will be released within the next few weeks - let's say six weeks to two months at the outside - because they are going to be released in a phased way and in different locations through Jonglei state. We are confident that will continue because the Cobra faction has made peace with the government SPLA forces. On the other ones we just have to be hopeful. We are trying to be realistic and we are trying to advocate to all the various factions that they should release child soldiers as soon as possible. But a lot will depend on the peace talks and the negotiations at a political level.

John Budd is a spokesman for UNICEF in South Sudan

South Sudan's leaders have agreed to settle differences within the country's ruling party, SLPM, as an interim step towards ending a year-long civil war which has killed at least 50,000 people. (22.01.2015)

Rebel commander Dominic Ongwen is in the hands of African Union troops and will face trial for war crimes at the International Criminal Court, the Ugandan army has said. Ongwen was a close associate of the warlord Kony. (14.01.2015)

10,000 children killed and recruited as child soldiers in CAR: report

Thousands of children have been killed, raped and recruited as child soldiers in the Central African Republic, a new Save the Children report says. Armed groups use the children as porters, couriers and sexual slaves. (18.12.2014)