South Sudan's leaders have agreed to settle differences within the country's ruling party, SLPM, as an interim step towards ending a year-long civil war which has killed at least 50,000 people. The leaders of South Sudan's warring factions have signed a deal in the Tanzanian city of Arusha in a bid to unblock efforts to end a year-long civil war.

The agreement aims at reunifying and reconciling the three factions of the ruling Sudan People's Liberation Movement (SPLM).

Salvatory Rweyemamu, head of communications at State House, the president's residence in Dar es Salaam, told DW that Kikwete was approached by Kiir at the end of 2014.

Kiir told him that South Sudan's problems originated within the SLPM and asked Kikwete to help him bring the three conflicting groups within the party together.

The full contents of the accord have not been officially disclosed, but Charles Ngereza, a correspondent for DW's Kiswahili service in Arusha, said much of the agreement focuses on removing some of the powers accorded to Salva Kiir in his capacity as chair of the SPLM. A key problem was that Kiir "had absolute powers to nominate and give people positions in the party or government, Ngereza said." 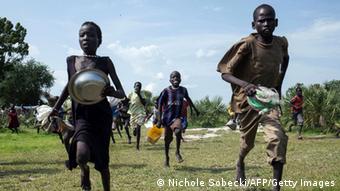 Millions live on the brink of famine in South Sudan

Fighting broke out in South Sudan in December 2013 when Kiir sacked Machar, his deputy. The escalating war split the SPLM along ethnic lines and set off a cycle of retaliatory battles and massacres across the country. At least 50,000 people have been killed, over a million displaced and the country driven close to famine.

Several ceasefire deals have been agreed but they all been violated, sometimes within a matter of hours. Peace talks have stalled frequently. But Rweyemamu insists that this latest deal is a new departure. "It is about differences within the ruling party. It is not about a ceasefire or stopping the fighting. Those things are still the topic of talks under IGAD in Addis Ababa," he said.

He was referring to the Intergovernmental Authority on Development, the eight-nation East African regional bloc, which has been mediating the rounds of stop-start talks in Addis Ababa between the warring factions. 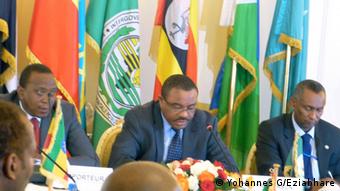 Regional leaders have shown weariness at the reluctance of South Sudan's leaders to settle their differences and in December 2014 IGAD member Ethiopia raised in the prospect of punitive sanctions against them as a "last resort" if peace talks failed to end their civil war.

The presidents of IGAD members Kenya and Uganda were present in Arusha for the signing of Wednesday's agreement emphasizing their determination to help bring the fighting to an end.

Ugandan President Yoweri Museveni said that in agreeing to reunite their party Kiir and Machar were making the Addis Ababa talks easier. "This is because the crisis started in the party and went into the country. This is a very big step in the process of peacemaking," he said.

Kenyan President Uhuru Kenyatta told the two South Sudanese leaders "I do hope that today forms a new beginning where you can forgive one another, a day when you can stop pointing your fingers at one another."

Heavy fighting was reported earlier this week between the army and rebels in South Sudan's Lakes state.