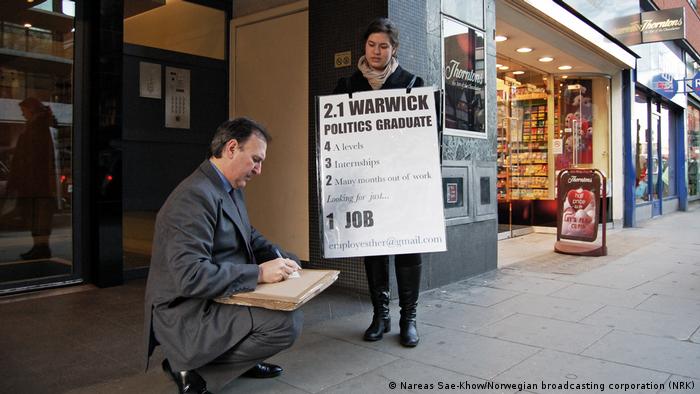 When Jordi Battlo, 24, from Barcelona recalls the hundreds of applications he has sent out in the past months, there is detachment in his voice, like an emotional shield. "I have pretty much lost count," the Barcelona native said.

Rejection has become a harrowing routine for the business and engineering graduate. "The lack of response from companies makes me feel like everything I have done doesn't count for anything," Battlo said.

After he completed his master's at IESE Business School in Madrid in July 2020, his only option was a short-term internship. Now he is unemployed.

Battlo belongs to the millions of young graduates across Europe who are scrambling in an overcrowded job market. Youth unemployment now stands at 17% in the EU — more than twice the general unemployment rate, according to Eurostat. 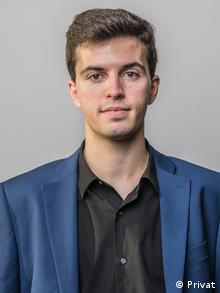 Jordi Battlo from Barcelona has sent out umpteen job applications

In October 2020, the Organization for Economic Co-operation and Development (OECD) warned that an entire generation of young people in Europe risked being left behind, as employers were halting hiring plans during the pandemic.

The suspension of entry-level positions and an increase in layoffs during the 2020 pandemic year have resulted in a tsunami of applications for open positions.

Bogged down by rejections, anxiety and depression, young people are one of the groups hit hardest by the secondary effects of COVID-19. Youth groups lament that their voices often drown in the pandemic uproar.

Hundreds of kilometers away from Barcelona, Georgia Burns, 23, sits in her childhood bedroom in Dublin. Since graduating with a master's in management from University College London in September 2020, she is plagued by the same worries as Battlo: "When I started my master's, I thought: OK, I will get a job when I graduate. Then the pandemic hit, and now I am doing a part-time internship on minimum wage. It's just not where I thought I would be."

The number of people aged 15-24 in the EU who are looking for a job or are underemployed rose by 5% in the past year, according to Eurostat. Spain and Italy are especially hard-hit, with over half of young people aged 15-24 unable to find work.

Battlo says that graduate jobs have become unattainable: "Every position has twice as many applicants as it normally does. Even for entry-level jobs, people apply with two or three years of experience."

Employers are recognizing this trend as well. "The number of applications has risen massively," Oliver Zischek, head of People Organization at Deloitte Germany, told DW. During the fall of 2020, the professional services company received 42% more applications than during the previous fall. According to Zischek, Deloitte offices across Europe are experiencing a similar deluge of applications.

With every new lockdown that is announced, Burns finds it harder to stay hopeful. Going on walks with friends who are also job-seekers has become an emotional anchor.

"It really helps having someone who understands what it's like," she said.

Some 50% of young people globally are showing signs of anxiety and depression, according to a 2020 survey conducted by the International Labour Organization and the European Youth Forum.

'A lost generation is not temporary'

"The messages we are getting is that we should push through and everything will go back to normal. But the risk of a lost generation is not temporary," Silja Markkula, president of the European Youth Forum, an NGO headquartered in Brussels, told DW.

Markkula said she felt that young people were being forgotten by European policy-makers. Social protection schemes didn't cover the types of work that young Europeans were forced to undertake, like short-term contracts and unpaid internships, while issues such as mental health didn't receive sufficient attention from Brussels, Markkula argued.

Long-term effects of youth unemployment vary from permanently lower earnings to decreased optimism about the future.

Despite the grave implications, European Commission President Ursula von der Leyen failed to mention youth unemployment as a key policy concern in her state of the union address in September 2020.

Esther Jardim from London, who graduated in 2009 during the global financial crisis, sympathizes with pandemic graduates. Looking back at her own story, she also sees upsides to graduating during an economic slump.

When, during the aftermath of the global financial crisis, Esther Jardim received a job rejection on Christmas Eve 2010, she decided to do something radical.

A sandwich board tied to her chest, she walked up and down London's business district of High Holborn. "2.1 Warwick Politics Graduate, 4 A levels, 3 Internships, 2 many months out of work, Looking for just 1 job," the sign read.

The stunt landed her about 30 interviews and got her her dream job at a big PR agency in the UK. The worries of pandemic graduates resonate with Jardim. At the same time, she also sees unique opportunities that job-seekers have today.

Thanks to social media, sandwich board PR stunts are no longer necessary to catch the attention of sought-after employers.

"Graduates can harness the ability to connect and reach out to people. Social media really took down barriers. You can send senior people in the company a message. They will reply," she told DW.

Looking back at her challenging job start, Jardim is grateful for what she went through 10 years ago. "It forced me to develop a sense of resilience early on in my career. I learned to pick myself up and dust myself off," she said.

Can your first job kill your career?