Understanding the US Electoral College

Every four years, the US elects a president, but voters don't have the final say. The Electoral College really chooses the president, a month after the people cast their ballots. Spencer Kimball explains. 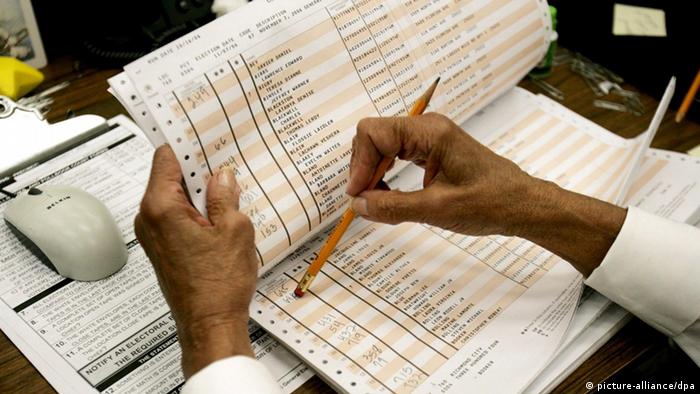 Even for many Americans, it's a system that's difficult to understand. US citizens aged 18 and older will cast their votes for the next president of the United States on November 8, 2016. The popular vote of the American people, however, will not directly determine the outcome of the presidential election.

An institution known as the Electoral College has the final say on who holds the highest office in the United States. The college is made up of 538 electors.

Each of the 50 states is apportioned a share of electors by adding together its representation in the two chambers of Congress, the House of Representatives and the Senate. In the House, a state's representation is based on its population. In the Senate, every state has two senators.

The state of New York, for example, has 27 representatives and two senators. Based on the formula, the Republican and Democratic parties in New York would nominate 29 electors for the presidential election.

"They are usually party stalwarts, someone who's given a symbolic reward," George Edwards III, an expert on the Electoral College at Texas A&M University, told DW.

When Americans cast their ballots for president, they're actually deciding which of the two political parties in their state will send its electors to the college.

In late December, more than a month after the popular vote, the electors gather in their various state capitals and cast the real vote for president. Congress receives and counts the electoral votes from all 50 states and Washington DC in January.

The candidate who wins 270 electoral votes becomes president. Normally, the popular vote in November and the Electoral College vote in December select the same candidate. But not always, and when they disagree, the electoral vote carries the day.

As a consequence, three presidential candidates in US history lost the popular vote but won the presidency. The most recent case was in 2000. Democrat Al Gore beat Republican George W. Bush by 500,000 votes in the popular election.

Bush, however, won 271 electoral votes and therefore the presidency. The Electoral College came about through a compromise made by the men who drafted the US constitution, ratified in 1788. Democracy was rare and untested at the time, and some of them feared that direct presidential elections could lead to mob rule.

The United States has changed drastically over the centuries, but the Electoral College has remained firmly in place, despite the fact that a majority of Americans would like to do away with it. More than 60 percent of the country wants direct presidential elections, according to a 2011 Gallup poll.

In 48 states, the Electoral College is a winner-take-all system. In California, for example, the majority votes reliably Democrat in presidential elections, which means all of the state's electoral votes almost alway go to the Democratic candidate. The Republican minority wins no representation among the state's electors.

As a consequence, the Democrats take California for granted, and the Republicans don't bother to challenge them. The same is true in Texas, just reversed. Republicans will almost certainly sweep the state's electoral votes, leaving little incentive for either party to run an aggressive campaign there.

Instead, the focus is on a handful of "battleground" or "swing" states. Both candidates have a shot at winning a plurality of the popular vote in these states, thereby sweeping its electoral votes. According to the news website Politico, there are seven swing states this time around: Colorado, Florida, Nevada, Ohio, Virginia, Iowa and New Hampshire.

Though most Americans would like to see the system changed, reform is also a complicated endeavor. Amending the constitution to abolish the Electoral College would require two-thirds of Congress and three-fourths of the states.

"Politicians are often ignorant," Edwards said. "They have a strong tendency to focus on their short-term political gain. If they think they're going to get something out of a system, they're not going to change it."

An initiative called National Popular Vote is trying to circumvent this process. Ten states and the US capital, Washington DC, have pledged to always award their electoral votes to the candidate who wins the popular vote.

For the National Popular Vote to take effect, states representing 270 electoral votes would have to sign on. The campaign is 61 percent of the way there.