Rapidly spreading wildfires in the US state of California has left thousands homeless. The so-called 'Valley Fire' is one of the most destructive in a generation. 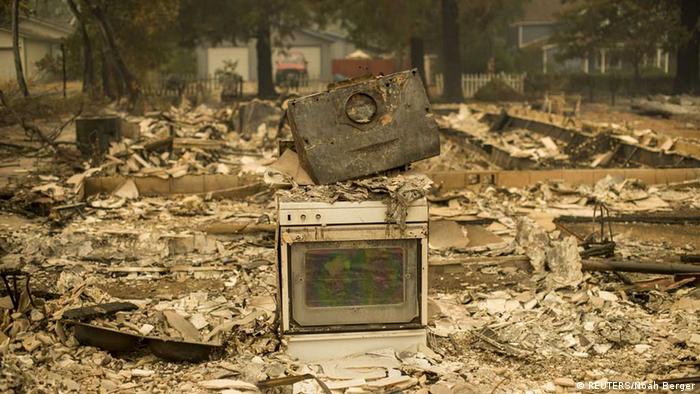 California Governor Jerry Brown declared a state of emergency Sunday for areas ravaged by the northern California blaze, and officials expanded mandatory evacuations as shifting winds sent flames and ash toward a number of towns in the hills north of Napa Valley's famed wine country.

The governor "today issued an emergency proclamation for Lake and Napa counties due to the effects of the Valley Fire, which has burned thousands of acres of land and caused the evacuation of residents and damage to highways and other infrastructure," an official statement said Sunday.

The town of Middletown, population 1,300, was particularly devastated by the Valley Fire, according to daily newspaper Santa Rosa Press-Democrat, which said the fire quadrupled in size overnight.

"I'm looking in all directions, and all I see is fire," Monte Rio fire chief Steve Baxman told the paper.

Residents streamed from Middletown and had to dodge smoldering telephone poles, downed power lines and fallen trees as they drove through billowing smoke. Whole blocks of houses burned in parts of Middletown, where firefighters were driving around flaming utility poles to put out spot fires Sunday afternoon.

On the west side of town, houses were burned to their foundations, with only charred appliances and twisted metal garage doors still recognizable, the AP news agency reported.

The Valley Fire has now consumed more than 50,000 acres (20,234 hectares) since erupting Saturday afternoon in rural Lake County, about 50 miles west of the state capital Sacramento.

Thousands of evacuees from Middletown, Cobb, Hidden Valley Lake and the Harbin Hot Springs resort gathered in shelters, restaurants and friends' houses in nearby Kelseyville and Calistoga waiting to hear about their homes, horses and dogs.

With zero containment despite efforts by state and volunteer firefighters, mandatory evacuations have been ordered for tens of thousands of people in communities throughout rural Lake County.

At least 1,000 firefighters have been called from across the state to combat the fast-moving blaze, which was tearing through bone dry oak-and-grass hillsides.

California's emergency chief Mark Ghilarducci says this summer's fires are the most volatile he has seen in 30 years of emergency response work. He says the main cause behind the fast-spreading fires is dry conditions from the four-year drought.

The fire erupted near the community of Cobb on Saturday afternoon. Four firefighters were hospitalized with second-degree burns after they were dropped off by helicopter to battle the fire, authorities said. They are reportedly being treated for second degree burns and are in stable condition.

Throughout the state 12 wildland blazes are currently burning but two -- one about 100 miles (160 kilometers) west of the state capital of Sacramento and one about 100 miles to the east -- have been particularly damaging over the last week, destroying hundreds of homes and mobilizing thousands of firefighters.

Rapidly advancing forest fires in the US state of California have spurred evacuations. One blaze now threatens an ancient grove of giant sequoia redwoods, some of the oldest on record. (12.09.2015)