Cultivation of opium in Afghanistan has reached a record peak, despite international efforts to curb the trade. The UN has warned that the withdrawal of foreign troops next year is expected to exacerbate the situation. 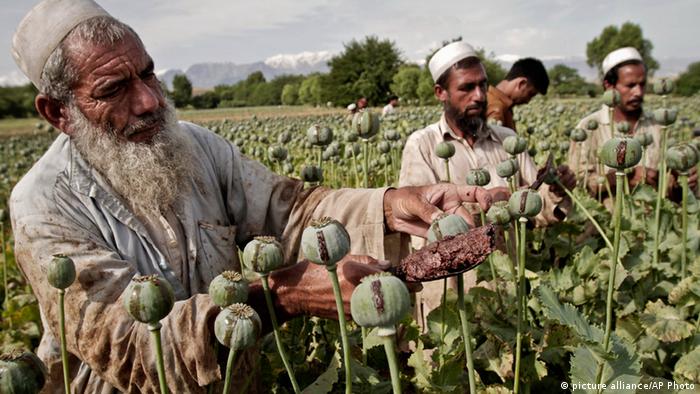 Afghan production of opium rose to record levels in 2013, according to a report issued by the United Nations' drugs control agency on Wednesday.

The harvest in May was recorded as amounting to 5,500 metric tons, 49 percent higher than last year and more than the net output of the rest of the world.

The UN's Office on Drugs and Crime (UNODC)'s regional representative in Kabul said the withdrawal of foreign troops was expected to make matters worse.

"The short-term prognosis is not positive," said Lemahieu. "The illicit economy is establishing itself, and seems to be taking over in importance from the licit economy."

UNODC said some regions that had seen a decline in cultivation in the past were now seeing an increase. Lemahieu said that farmers' uncertainty about the future was fuelling the rise in poppy cultivation.

The report was based on information gathered by the UNODC and the Ministry for Counter-Narcotics, as part of an annual assessment. It revealed that the two northern provinces of Balkh and Faryab, which were last year declared to be poppy-free, were again growing the plant.

'Threat to the state'

The agency noted that an interest in the trade united both Islamist insurgents and individuals connected with the Afghan government.

"When it comes to the illicit economy there is very little difference between the insurgents and the people on the other side," said Lemahieu.

Describing the figures as "sobering," UNODC chief Yuri Fedotov repeated a warning he gave last month that the drug problem was threatening to overwhelm the state.

"If the drug problem is not taken more seriously by aid, development and security actors, the virus of opium will further reduce the resistance of its host, already suffering from dangerously low immune levels due to fragmentation, conflict, patronage, corruption and impunity," said Fedotov.

Meanwhile, the British Foreign Office said the report was a "stark reminder" of the challenges that Afghanistan faced in tackling the drugs trade.

UNODC began to document the production of opium - the main ingredient of heroin - in Afghanistan in 1994. At that time, the poppy plant was recorded as being grown on 71,000 hectares (175,000 acres) of land. That area rose to more than 100,000 hectares after the US led invasion that toppled the Taliban in 2001.