The UN human rights office has disclosed new claims of abuse by peacekeepers in the Central African Republic. The accused soldiers are said to have been part of the European Union's contingent in the war-torn nation. 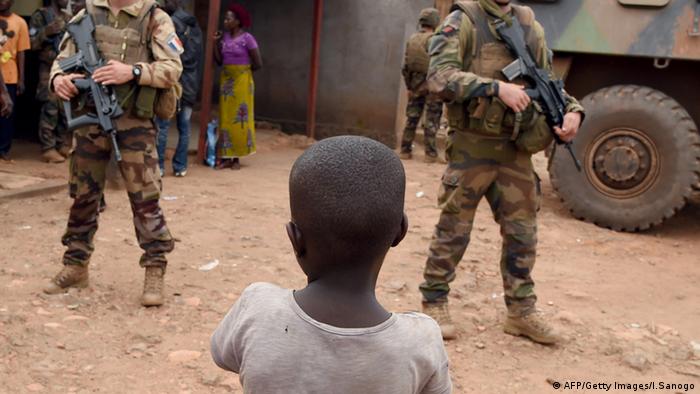 The United Nations human rights chief said on Friday that new allegations of sexual abuse by UN peacekeepers had surfaced in the Central African Republic. The reported crimes involved the troops from the European Union contingent deployed in the country during a period of instability in 2014.

A statement from Zeid Ra'ad Al Hussein, the UN High Commissioner for Human Rights, said both boys and girls had been interviewed by UN staff, and told stories of rape and of being paid for performing sexual acts.

"Four of the girls said their abusers were attached to contingents operating as part of the European Union operation," Zeid said.

"While the nationalities of some of the soldiers remain unclear, three of the girls said they believed their abusers were members of the Georgian EUFOR contingent," Zeid continued. "The four girls were aged between 14 and 16 at the time of the alleged abuse."

Zeid added that other claims of abuse against the French force had also been brought forward.

In one incident, Zeid described how a girl was coerced into having sex with a soldier in exchange for "a bottle of water and a bag of cookies."

"Far too many of these crimes continue to go unpunished, with the perpetrators enjoying full impunity," he said. "This simply encourages further violations."

The European Union responded to the allegations saying "the EU follows a zero-tolerance policy as regards sexual misconduct or criminal activities." It also offered its assistance to the UN human rights office in following up and investigating any reports of assault.

Georgia's Defense Ministry also vowed to investigate the accusations as swiftly as possible.

In 2013, a group of mostly Muslim rebels staged a coup in the mainly Christian nation, starting a cycle of sectarian violence and revenge that has killed thousands and displaced hundreds of thousands more.

Political change is gathering pace in Central African Republic, where two ex-prime ministers will be vying for the presidency in a run-off poll. Opponents' charges of first round 'irregularities' are subsiding. (08.01.2016)

Central African Republic votes in a presidential election on Wednesday which many hope will signal the end of months of sectarian strife in which thousands have been killed and many more forced from their homes. (29.12.2015)