The UN mission to combat Ebola, which opened its headquarters in Ghana, is laying out a strategy to bring the disease under control. Another UN body reports that Ebola orphans are being shunned by suspicious relatives. 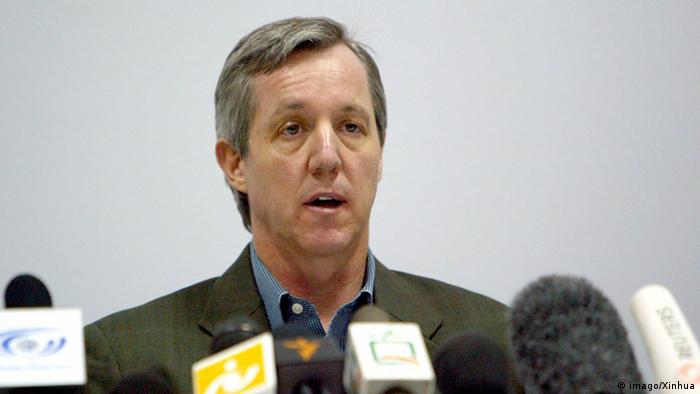 The UN Mission for Ebola Emergency Response (UNMEER) aimed to hit the ground running on Tuesday (30.09.2014) saying it wanted to achieve significant progress in combating the deadly disease within two months.

Laying down benchmarks, Anthony Banbury, head of UNMEER, told the media at the opening of the mission's headquarters in Accra, Ghana that "70 percent of infected people need to be under treatment, 70 percent of burials need to be done in a safe way." He added that "we need to do it in 60 days."

He said this was an extremely ambitious target and "the only way it will be achieved is through this international effort."

Banbury described the crisis as "very grave" but said that the political will, resources and action being shown on the ground were tangible signs of progress being made towards tackling it. 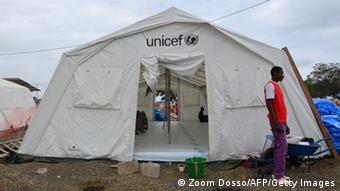 An isolation tent in Monrovia, Liberia. UNICEF has been reporting that Ebola orphans are being shunned

Most of the mission's work will take place in the countries most affected by Ebola, notably in Sierra Leone, Liberia and Guinea. Ghana will act as a headquarters focused on logistics, policy and expertise, Banbury added.

Health of UNMEER staff a priority

Banbury will lead a team on a tour of the countries struggling to combat the disease. The team will be assessing the countries' needs and providing assistance in the coming days.

He emphasized that his top priority was to keep UNMEER staff healthy "and by keeping our staff healthy, making sure that no one else is at risk of catching Ebola." He said the World Health Organization was putting in place "very stringent, rigid protocol for the staff of UNMEER for how we act, how we travel, the precautions we take."

The Ebola crisis has been accompanied by reports of doctors and other health workers succumbing to the disease.

DW's correspondent in Accra, Isaac Kaledzi, says Ghanaians are sharply divided over the perceived risk that might arise from the presence of a UN Ebola mission in their country. One Ghanaian told him "their presence here is creating a threat to us," but another was unperturbed saying "I don't see that there should be any kind of fears."

Speaking before UNMEER unveiled its goals, Prince Krepleh, chairman of Liberia's Civil Society Organizations (CSO) told DW he believed the UN mission "should focus on the building of treatment centers, equipping those centers with the appropriate logistics and resources to ensure that people are taken care of." 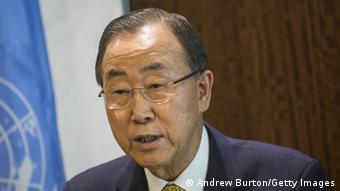 UNMEER was set up by UN Secretary General Ban Ki-moon earlier this month following criticism of the world's body's response to the outbreak. So far more than 3,000 people in West Africa have died from Ebola this year. The outbreak was first reported in the remote southeast forest region of Guinea in March.

Meanwhile thousands of children who have lost parents to the Ebola epidemic risk are being shunned by frightened and suspicious relatives, the UN children's fund said on Tuesday.

"Ebola is turning a basic human reaction like comforting a sick child into a potential death sentence," Manuel Fontaine, UNICEF's regional director for west and central Africa, said in a statement.

In west African society, bereaved children are usually taken in by a member of the extended family.

But UNICEF said relatives in some communities are rejecting the offspring of victims of Ebola, which spreads through contact with infected body fluids, because "the fear surrounding Ebola is becoming stronger than family ties".

Misunderstandings about the disease persist. "Many people in Liberia believe that Ebola is a health problem which has been orchestrated by the government, and probably some of our partners, with a view to make more money out of the Liberian people," Krepleh said.

In Sierra Leone, the government was forced to issue a statement denying that Ebola had been defeated after hundreds had taken to the streets in provincial towns to celebrate what they thought was the end of outbreak.

Ebola crisis: Is the world up to the challenge?

As the US and the world step up their efforts against the Ebola outbreak in West Africa, the institutions and practices they rely on are being called into question. (30.09.2014)

A German military transport plane carrying aid to help in the fight against Ebola in Africa has been stranded in the Canary Islands due to mechanical problems. It's just the latest setback affecting the German air fleet. (29.09.2014)

Leaders of West Africa's nations facing Ebola have made appeals via video to world leaders at the UN. Its chief Ban Ki-moon says a 20-fold boost in aid is needed. Germany's military is airlifting materials for Liberia. (25.09.2014)