The United Nations is seeking $400 million to address the outbreak of cholera in Haiti, but the world body denied that the request is an acknowledgement of responsibility for bringing the disease to the country. 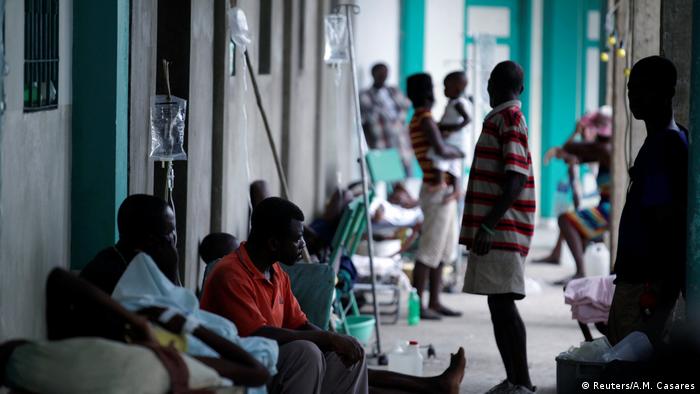 The United Nations requested $400 million (368 million euros) from its 193 member states on Monday to respond to the cholera outbreak in Haiti following Hurricane Matthew.

The category 4 hurricane struck Haiti three weeks ago and caused widespread destruction, particularly in the southwest region of the country. Hundreds of Haitians died after the hurricane, and more than 1 million people require assistance. On top of the demand for aid, cholera has resurfaced once again. Officials have already counted hundreds of cases, with the number of afflicted expected to rise.

The UN has proposed a two-part plan to tackle the disease. The first part, requiring an estimated $200 million, would bring rapid response teams to areas of new cholera outbreaks in Haiti. It would also fund cholera vaccines and provide investment in clean water and sanitation systems. Many Haitians lack access to such systems.

The second part of the plan involves direct compensation to families who were affected by cholera since the disease spread in Haiti in 2010. One hundred million dollars would be spent on communities with cholera infections, and the remaining $100 million would go towards families of those who died in the cholera outbreak.

Assistance has been slow for many Haitians since the hurricane struck, which has prompted protests and the looting of aid supplies and vehicles. A previous appeal from the UN for $120 million (110€ million) to help Haiti drew in only 12 percent of the funds needed.

Nabarro said it has "proved to be very hard indeed to get any traction" from member states on providing donations.

Accusations of causing the outbreak

The United Nations is accused of exposing Haiti to cholera in its response to the 2010 earthquake, which killed more than 200,000 people. UN peacekeepers from Nepal, a country with its own cholera outbreak at the time, dumped infected sewage into Haiti's largest river and primary water source after the earthquake. Soon the country recorded hundreds of thousands of infections and more than 9,300 deaths due to the waterborne disease.

Victims of the outbreak brought a class-action lawsuit against the UN in a United States court. The UN claimed immunity against prosecution, which was upheld in court.

UN Secretary-General Ban Ki-Moon, who steps down from his position after two five-year terms, said in August that the UN has a "moral responsibility" to help cholera victims and families.

The United Nations has admitted it played a role in introducing cholera to Haiti and plans to give "material" aid to victims. More than 9,300 Haitians have died of the disease since 2010. (20.08.2016)

Nearly 800 Haitians have contracted cholera two weeks after Hurricane Matthew hit the Carribean country. Relief efforts are not keeping up with demand. (19.10.2016)