UN chief encouraged by talks aimed at reuniting Cyprus | Europe| News and current affairs from around the continent | DW | 01.02.2010

Peace negotiators in Cyprus hope that a visit from United Nations Secretary General Ban Ki-moon will give a badly needed boost to peace talks stalled since September 2008. 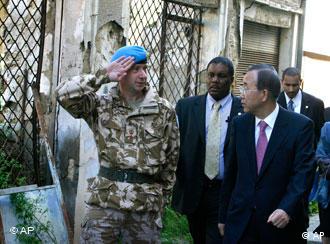 After meeting with Greek and Turkish Cypriot leaders in Cyprus on Monday, United Nations Secretary General Ban Ki-moon announced that the two sides had agreed to resume work on a peace deal.

"I'm encouraged that the two leaders personally assured me of their shared commitment for a comprehensive solution as early as possible," Ban said in a press conference at the United Nations compound in Nicosia. 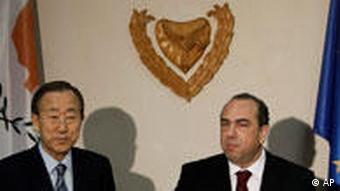 Ban met with Greek Cypriot leader Demetris Christofias and Turkish Cypriot leader Mehmet Ali Talet in an effort to inject some momentum into long-running talks between the two sides. The current goal is to unite the divided island as two federal zones under a central government.

The eastern Mediterranean island has been divided since 1974, with Greek Cypriots living on the southern portion and Turkish Cypriots to the north. The country split after Turkish troops invaded the northern part of the island in response to a coup spurred by people who advocated Cyprus' reunification with Greece. 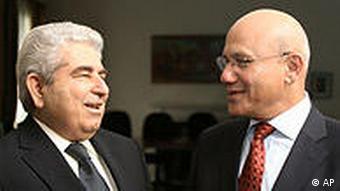 Talks between Christofias, left, and Talat have been ongoing for more than a year

'A spirit of compromise'

Ban's visit to Cyprus follows a week of United Nations-led negotiations between Christofias and Ali Talet. Despite making progress in some areas, including how the island would be governed in the event of a peace agreement, the UN-led talks foundered when it came to the question of resolving property claims from thousands of internally displaced people, territorial lines, and other issues.

" We will need even more courage and determination in the period ahead to bring these talks to a successful conclusion," Ban said in a press conference alongside Christofias and Ali Talet.

Observers say the time to broker an agreement might be running out. A Turkish Cypriot hardliner who supports the formation of two separate states is leading in opinion polls ahead of the April 18 elections.

EU summit unlikely to heal rift between Turkey and Cyprus

Turkey's refusal to allow Cypriot ships and aircraft into its ports threatens to derail its European Union membership ambitions, which are up for discussion during the EU summit that begins Thursday. (10.12.2009)

George Papandreou, the new Greek Prime Minister, has visited Cyprus looking to address the intransigent problem of the Mediterranean island directly. But all he had to offer Turkey was guarded support for EU membership. (19.10.2009)

The EU's annual report on Turkey's membership bid has praised Ankara for its reform and foreign policy initiatives. But this is being met with little enthusiasm in Turkey as doubts over its bid continue to grow. (14.10.2009)