UN calls for 'maximum restraint' after death of Palestinian minister

The death of a Palestinian official after a run-in with Israeli soldiers has caused outrage among Palestinians and world leaders have urged calm. The official had been on his way to plant olive trees before the skirmish. 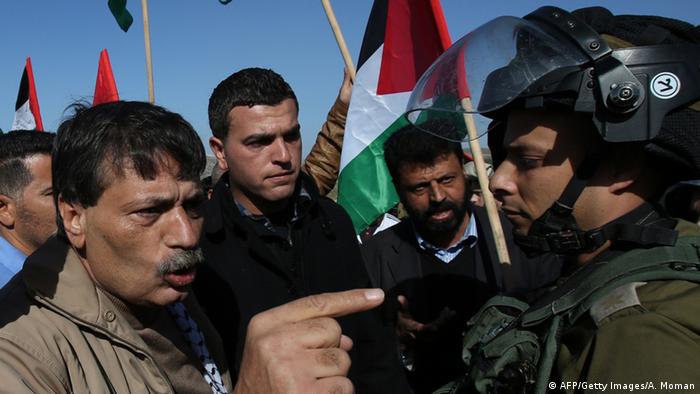 Palestinian President Mahmoud Abbas on Wednesday condemned "the brutal assault that led to the death of freedom fighter and Fatah Revolutionary Council member" as a "barbaric act that cannot be tolerated or accepted."

The Palestinian leader said he would wait for the results of an autopsy before deciding how to respond and called for three days of mourning in the Palestinian territories.

Some have called for suspending security cooperation with Israel in the West Bank.

Ziad Abu Ain died on Wednesday en route to hospital shortly after a confrontation with Israeli security forces. The exact cause of death is still not certain, but video footage showed Israeli soldiers firing tear gas unprovoked at a group of around 100 Palestinians and pro-Palestine activists who had been marching towards an unauthorized settler's outpost north of Ramallah near the West Bank village of Turmus Aya to plant olive trees.

Some eyewitnesses said the minister had been hit on the chest by a tear gas canister and others speculate he died because of inhalation of the tear gas.

An Israeli military statement said the soldiers had confronted the group to prevent them from marching toward the Israeli settlement.

"The Israeli Defense Force is reviewing the circumstances of the participation of Ziad Abu Ain and his later death," it said.

It added that it had proposed setting up a joint Israeli-Palestinian committee to investigate the minister's death.

In response to the death of Ziad Abu Ain, dozens of Palestinians threw rocks at Israeli soldiers near Ramallah.

A 12-year-old boy was subsequently seriously injured after he was hit in the head by a rubber bullet.

Israel put its security forces on high alert in flashpoint sites throughout the occupied territory.

Meanwhile, UN Secretary General Ban Ki-moon called on all sides on Wednesday to "exercise maximum restraint and avoid further escalation," his spokesman said. He also urged authorities to "conduct a swift and transparent investigation into the circumstances of the brutal death."

Neighboring Jordan said the incident was "a crime" and denounced "clear evidence of human rights violations by the Israeli army."

Federica Mogherini, head of the EU's foreign affairs, called for an "immediate, independent" inquiry and voiced great concern over reports of brutality on the part of Israeli forces, saying they were "extremely worrying."

The rights group demanded an independent and impartial investigation.

"All the evidence we have shows this large-scale destruction was carried out deliberately and with no military justification," said Philip Luther, Amnesty's Middle East and North Africa program director.

He said statements by Israeli officials indicated the attacks were a means of pressure, and therefore constituted collective punishment.

Israel has closed a contested Muslim-Jewish holy site in Jerusalem following the shooting of a Jewish ultranationalist. Palestinian leader Mahmoud Abbas has condemned the move as a "declaration of war." (30.10.2014)

UN head Ban Ki-moon has made a brief trip to war-ravaged Gaza, following pledges by an international donor conference to rebuild the territory after a devastating Israeli offensive this past summer. (14.10.2014)