UN asks US how many civilians its unmanned drones kill

The UN's special rapporteur on human rights and counterterrorism has asked the US to publish figures for civilian casualties from its drone attacks. His own data suggested at least 400 in Pakistan alone since 2004. 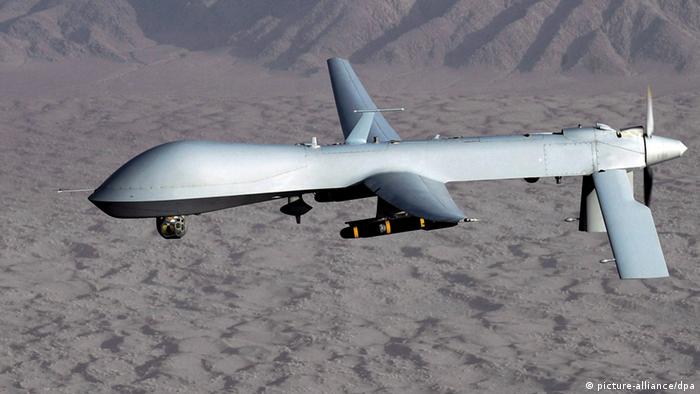 UN human rights and counterterrorism expert Ben Emmerson on Friday urged the United States to reveal its own information on how many civilians are thought to have been killed in strikes by unmanned drone aircraft.

Emmerson said in a special report that information from Pakistan's Foreign Ministry recorded at least 330 drone strikes in the largely lawless region bordering Afghanistan since 2004. The government in Islamabad had recorded 2,200 deaths from these attacks.

Of these, Emmerson said that Pakistan had confirmed that "at least 400 civilians had been killed as a result of remotely piloted aircraft strikes and a further 200 individuals were regarded as probable noncombatants."

"Officials indicated that, owing to underreporting and obstacles to effective investigation, those figures were likely to be an underestimate," Emmerson continued.

The largest US drone deployments take place over Pakistan, Afghanistan and Yemen. Missions in Pakistan and Yemen have CIA involvement and very little information is publicly released.

About 2,500 people have been killed in US drone attacks on Pakistan's tribal regions in the last nine years. It's crucial to identify the victims, says Jack Serle from the London-based Bureau of Investigative Journalism. (04.10.2013)

"The involvement of the CIA in lethal counterterrorism operations in Pakistan and Yemen has created an almost insurmountable obstacle to transparency," Emmerson said. "One consequence is that the United States has to date failed to reveal its own data on the level of civilian casualties inflicted through the use of remotely piloted aircraft in classified operations conduced in Pakistan and elsewhere."

The issue often makes the front pages in the US, and President Barack Obama said in May that "before any strike is taken, there must be near-certainty that no civilians will be killed or injured."

CIA director John Brennan had said during his confirmation process earlier this year that figures on civilian casualties from drone attacks should be made public. Without publicly offering data, US officials have often sought to imply that the numbers were considerably lower than the estimates from Pakistan's foreign ministry suggest.

The international community is still discussing the legality of using unmanned combat aircraft, despite their growing prevalence around the world. International norms currently allow drone strikes only to prevent imminent danger of an attack; suspected past terrorist involvement, for example, is not considered sufficient justification.

Germany, which currently owns surveillance drones only, is reportedly closing on a deal to buy in armed units for the Bundeswehr - most likely from the US. The defense ministry said in answer to an official query from the strictly pacifist Left Party in August that no decision would be made until 2014, after national elections. This announcement weeks before the ballot followed a separate scandal in May, when the government scrapped a major project for an unmanned drone after pouring an estimated 300 million euros ($410 million) into its development.

The UN General Assembly is due to debate drone usage in New York next Friday.