Ukrainian protesters may be risking their lives, as cases mount in which activists are kidnapped and beaten. One of them was found dead, and others have gone missing. Some experts suspect death squads behind the crimes. A sign hangs on one of the three-meter high barricades built out of sacks filled with snow that block entrance to Independence Square in Kyiv. It bears the words: "Belarus is with you!" in large, black letters against a white background - a gesture of solidarity from Belarusian opposition activists.

But the message could also be read as such: in Ukraine, the political situation now resembles that of its neighbor.

Bound hands, dead in the forest

A photo that hangs near that sign offers a piece of evidence. A bearded man with clever eyes can be seen in it. Yuri Verbizky, a 50-year-old seismologist from the western Ukrainian city of Lviv, was found dead in a forest near Kyiv on January 22, 2014. His hands had been bound together with tape, and his corpse showed signs of torture.

Few details are known, but doctors have determined that Verbizky died due to exposure. Temperatures of around minus 15 degrees Celsius (5 degrees Fahrenheit) are common at the moment in Ukraine. Police are investigating the case as murder.

Verbizky took part in protests in Kyiv and suffered an injury to his eye. Another activist, Ihor Luzenko, brought him to the hospital. Both were then kidnapped by around 10 unknown individuals and taken to the forest where they were beaten, Luzenko said in an interview with DW. 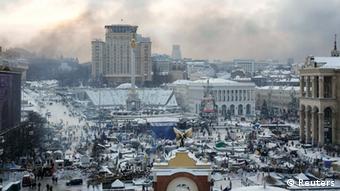 "They were people who are loyal to the government and the president," said the activist, who is currently in a Kyiv hospital. "They are prepared to do anything, all the way up to murder, in order to protect the country - that's how these people see the protests at Maidan."

Luzenko doesn't believe that the kidnappers wanted to kill Verbizky, but, he added, "On the other hand, it seems not to have mattered to them whether he survived."

They wanted to teach the opposition activist a lesson, says Luzenko, and he believes they'll strike again elsewhere.

It's not just a matter of isolated cases. Dmytro Bulatov has been missing since January 22. The 35-year-old is one of the leaders of "Automaidan," the name assumed by a group of primarily young car owners, who have become a driving force behind the current protests.

On Sunday (19.01.2014) last week, Bulatov urged Ukrainian opposition heads to settle on a single protest leader at a rally in Kyiv. When the opposition declined to do so, it led to a radicalization of the protests at Kyiv's Hrushevskoho Street. Later, Bulatov declared Automaidan stands behind Vitali Klitschko and the UDAR party.

Automaidan's activists drive through the city and attempt to block busses transporting police special forces units. During one such action, around a dozen activists were arrested, and police officers destroyed their vehicles. Bulatov was not among those arrested, the police said.

Olexy Hryzenko, an Automaidan activist, told DW he says the government is the most likely culprit for Bulatov's disappearance, adding, "We still don't know today whether he's alive."

However, Hryzenko adds, it could be the case that the Automaidan leader has gone into hiding after receiving severe threats. Bulatov's friends have now collected a $25,000 (18,300 euros) reward for information about his fate. 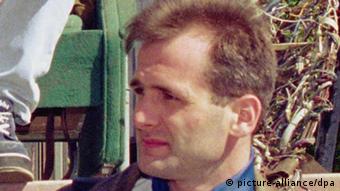 Journalist Georgy Gongadze was murdered in 2000

Reports of missing activists have also come in from other Ukrainian cities. Vitali Portnikov, an influential journalist and member of the opposition movement's coordinating committee, fled Ukraine. He had received information that he was set to "become the next Georgy Gongadze."

Gongadze was a Kyiv-based journalist who was critical of the government. In fall 2000, he was kidnapped by police and murdered in a forest. His case unleashed a severe political crisis.

There's already talk among some experts of death squads made up of criminals and members of the police. Their task is alleged to be abducting and then beating or killing opposition activists in order to intimidate protesters. Some believe that Russian secret agents could be behind the attacks, but there are only certain hints in that direction and no evidence.

Ukraine is not known for being home to death squads, but Belarus is. In the 1990s, multiple opposition politicians and journalists disappeared without a trace. In at least one case that went to court, it was proven that Belarusian intelligence agents had been behind the death of a journalist.

If the Ukrainian protest movement seeks an efficient end to the country's crisis, it should have accepted Yanukovych's power sharing compromise, says Jelena Hoffmann, an honorary consul for Ukraine based in Leipzig. (27.01.2014)

Opinion: Yanukovych is on the defensive

While attempting to divide the protest movement, Ukraine's president, Viktor Yanukovych, has come under increased pressure himself. Only early elections can solve the national crisis, believes DW's Bernd Johann. (26.01.2014)

The women of Kyiv's Independence Square

They hand out food to the demonstrators, clear away snow and ice from the streets and assist the wounded. Hundreds of women are getting involved in the opposition protests in Ukraine's capital, Kyiv. (26.01.2014)