Ukraine's former prime minister, Yulia Tymoshenko has been accused of misusing state funds while she was in office. She has rejected the charges, saying they are politically motivated. 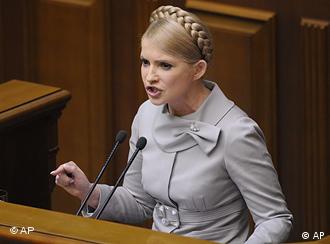 Tymoshenko failed in her bid to become president

The former prime minister of Ukraine was charged with abuse of power on Monday.

Yulia Tymoshenko could face up to 10 years in prison, followed by a three-year ban from politics, if she is convicted of misusing more than 151 million euros ($200 million) in state funds.

"I will defend myself absolutely clearly and openly", Tymoshenko told reporters. "I am not afraid of any investigation."

The populist leader, who was prime minister of Ukraine between 2007 and 2010, is accused of illegally using money raised from selling carbon emission rights under the Kyoto Protocol to plug gaps in the country's pension fund during the economic downturn in 2009.

Tymoshenko rejected the charge, saying the investigation was part of a political vendetta.

She narrowly lost out to long-term rival Viktor Yanukoych in February's presidential election. "This is how the president of Ukraine is getting rid of his main competitor", she said.

Tymoshenko was a leading figure in the Orange Revolution, a series of street protests which denied Yanukovich victory in the disputed 2004 presidential election.

The prosecutor general's office has ordered her to remain in Kiev during the investigation.

The former government of Yulia Tymoshenko has been accused of misappropriation, according to an audit ordered by Ukrainian President Viktor Yanukovych. Tymoshenko's aides say the audit was "politically motivated." (15.10.2010)

Ukrainian president Viktor Yanukovych has formed a new coalition and appointed a cabinet with ally Mykola Azarov at its head. The events come a week after Yulia Tymoshenko was ousted from her post as Prime Minister. (11.03.2010)

The Ukraine parliament has ousted Prime Minister Yulia Tymoshenko with a vote of no confidence. Viktor Yanukovych, the country’s recently elected president, now needs to form a working coalition to run the country. (03.03.2010)