The head of the self-proclaimed "Donetsk Republic" in eastern Ukraine, Alexander Zakharchenko, has died in an explosion at a Donetsk coffee shop. The Russian Foreign Ministry said Ukraine was likely behind the bombing. 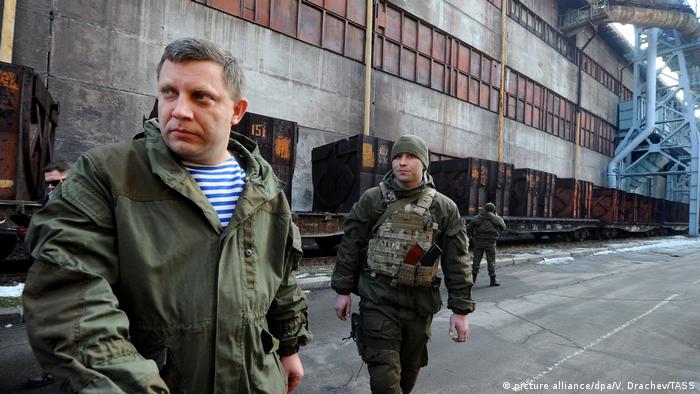 Zakharchenko (left) has led the rebel-controlled entity since 2014

Pro-Russian rebels in Ukraine confirmed that key separatist leader Alexander Zakharchenko was killed on Friday, adding that that several "Ukrainian operatives" were detained after the deadly blast.

Read more: Across the frontlines in Eastern Ukraine

Russia has 'all reasons to believe' Ukraine was behind the bombing

"They are not fulfilling promises of peace, and as we see, they decided to move on to the bloody battle," said Russia's Foreign Ministry spokeswoman Maria Zakharova. She added that Moscow had "all reasons to believe" Kyiv was behind the attack.

Separatist leaders pledged a response, saying the blast was "an obvious act of aggression by Ukraine."

On Saturday, Russian President Vladimir Putin's spokesman said the murder was a provocation that will undermine a Western-brokered peace agreement.

"Zakharchenko's death will certainly lead to increased tensions in the region" and undermine the so-called Minsk agreements brokered by France and Germany in 2015, Peskov said.

Zakharchenko was a 'true people's leader'

Russian President Vladimir Putin offered his condolences to Zakharchenko's family, praising him as a  "bold and resolute man" and a "true people's leader."

"The vile murder of Alexander Zakharchenko serves as yet another testimony that those who have chosen the way of terror, violence, intimidation do not want to pursue a peaceful, political solution of the conflict," Putin said in a statement.

The Russian president also addressed the residents of the rebel-controlled areas, saying that "Russia will always be with you."

Kyiv's intelligence agency SBU offered two versions of Zakharchenko's killing, hinting that Russia may be involved in the attack.

"We have reasons to believe that Zakharchenko's death could be the result of an internal struggle among the militants, mostly due to redistribution of business interests," said SBU chief Igor Guskov. "However, we also don't exclude the possibility that it was an attempt by Russian intelligence services to remove a disliked figure, which, according to out information, became superfluous and was bothering the Russians."

Shaky ceasefire: The assassination of Zakharchenko threatens to reignite the conflict between the rebels and the security forces, which had been reduced to occasional shelling with virtually no large-scale skirmishes between the two sides. This week, the rebels and the government agreed to a truce to allow for students to attend classes at the beginning of the school year.

A look at the war in eastern Ukraine:  Russian-speaking rebels rejected Kyiv rule in 2014, following the ouster of Russia-friendly Viktor Yanukovych and Russia's annexation of Crimea. The war has since claimed over 10,000 lives. Ukraine blames Moscow for orchestrating the rebellion and supplying the militants with weapons. Russia denies direct involvement, but admits there are Russian volunteers fighting alongside local forces. The conflict, alongside the takeover in Crimea, prompted a diplomatic ice age between Moscow and Western countries, with the US and EU imposing sanctions on Russia.