Ukraine court hands back powers to president | Europe | News and current affairs from around the continent | DW | 01.10.2010

A Ukrainian court has bolstered the power of President Viktor Yanukovych, ruling against changes that handed authority to parliament. The president is accused by some of seeking to return the country to authoritarianism. 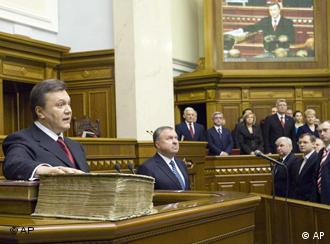 Yanukovych, left, has more freedom in choosing his cabinet

The decision - called for by more than 250 pro-Yanukovych representatives in the parliament - restores Ukraine's original post Soviet constitution, which was altered in 2004.

"The court has ruled that the 2004 amendments to the Ukrainian constitution were unconstitutional due to violations of constitutional procedures in their examination and adoption," the head of the court, Anatoly Golovin, announced on Friday.

The original constitution - which gave the president free reign in choosing his cabinet - was hastily altered just before a series of mass protests that swept former pro-Western president Viktor Yushchenko to power. 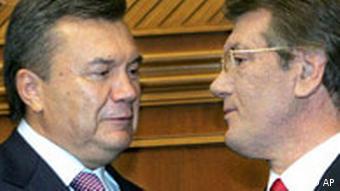 The 2004 election of Yanukovych was overturned and Viktor Yushchenko won the subsequent poll.

The series of protests, which became known as the Orange Revolution, started after the pro-Russian Yanukovych was declared the winner of a presidential election. He lost office when the polls were ruled to have been fraudulent.

'An abuse of power'

Opponents of Yanukovych say that the ruling is part of an attempt to make the country more authoritarian.

"The court has discredited itself. This decision borders on an abuse of power," said the deputy head of Yulia Tymoshenko's parliamentary opposition faction, Olena Shustik.

Yanukovych, meanwhile, called on all branches of political power to observe "the rule of law" and accept the decision.

The ruling is expected to please the Kremlin, with which Yanukovych has been seeking to repair ties since the former regime moved more towards the EU.

Russian President Dmitry Medvedev has criticized changes in Kyrgyzstan to make the country a parliamentary democracy rather than a presidential system.

The disappearance and suspected murder of Ukrainian journalist Vasyl Klymentyev has again turned the spotlight on what many press freedom organizations fear is a return to Soviet-style crackdowns on dissenting media. (16.09.2010)

A surprise deal between Ukraine and Russia implies new rapprochement in Eastern Europe. Top-ranking politicians have declared a new era in the countries' relations - to the chagrin of Ukraine's pro-West opposition. (22.04.2010)