Missing journalist stokes fears of Soviet-era media crackdown in Ukraine | World | Breaking news and perspectives from around the globe | DW | 16.09.2010

The disappearance and suspected murder of Ukrainian journalist Vasyl Klymentyev has again turned the spotlight on what many press freedom organizations fear is a return to Soviet-style crackdowns on dissenting media. 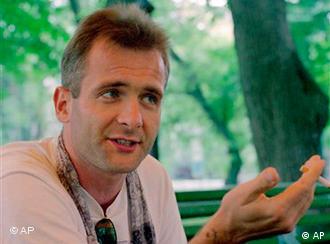 The new case echoes the killing of Hryhorii Gongadze in 2000

Klymentyev's disappearance in early August and the subsequent investigation into his possible murder draw a number of parallels with the killing of Hryhorii Gongadze in 2000. Gongadze, a relatively-unknown investigative reporter, went missing in suspicious circumstances only for his headless corpse to be found some weeks later in a shallow grave in woods south of the Ukrainian capital.

The case exploded on an international scale after it was revealed that Leonid Kuchma, Ukraine's then president, had been recorded telling members of the Ukrainian security forces to "take care" of Gongadze. Despite the evidence found on the secret audio tapes, the case is still unresolved a decade later.

Klymentyev is also a small-time investigative reporter, specializing in exposing official corruption and scandals in his role as editor-in-chief of the Novy Stil (New Style) newspaper in Kharkiv, Ukraine's second city. His exposés had unsurprisingly earned him many enemies in the local government, much like Gongadze's sensationalist revelations had for him. Shortly before he went missing, Klymentyev had been working on an article about the lavish lifestyles of four top officials, including one from Ukraine's security service.

Friends and family are convinced that - like Gongadze - Klymentyev had crossed some very powerful people and that he is already dead.

"It's worrying to see uncomfortable echoes of the Gongadze murder in Klymentyev's disappearance," Andrew Wilson, a senior lecturer and Ukraine expert at the European Council on Foreign Relations, told Deutsche Welle. "Klymentyev was a persistent critic of the government and while it is difficult to say that the regime has had a direct hand in his disappearance, it has certainly created a climate in which the local bad guys felt that taking him out was an option - if that indeed is what has happened." 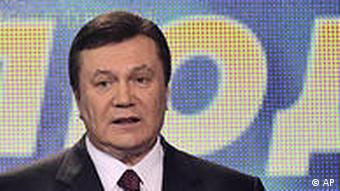 Press freedom campaigners believe that Klymentyev's disappearance could be the most shocking indication yet that a wider campaign is being waged against the media by the government of Ukraine's new pro-Russian President Viktor Yanukovych.

Yanukovych, who came to power seven months ago, is accused by journalists in Ukraine and by organizations monitoring the situation around the world of reversing the freedoms afforded the media in the six years following the 2004 Orange Revolution. Under former President Viktor Yushchenko, Ukraine's media boomed during a period of unprecedented free speech and expansion.

However, since Yanukovych came to power, a number of dissenting TV stations have had their licenses revoked and the pro-Yanukovych Inter Media organization has become increasingly prominent. Journalists in the country are talking about a new era of fear and censorship while Reporters Without Borders recently issued a statement saying that broadcast media pluralism in Ukraine was being "seriously eroded" and that a "disturbing level of hostility" and even "physical attacks" were being reported by journalists.

"A freer press was one of the main achievements of the Orange Revolution but it was only freed in the way that it was free of state direction," said Wilson. "It was never free from oligarchic control so Ukraine had a pluralistic press but each newspaper and TV station had its own owner with its own editorial line. And while there was a real cultural revolution at the heart of the media industry during that time, journalists were still not adverse to accepting paid-for stories." 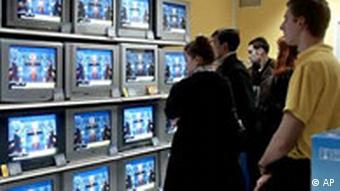 The media landscape seems to be driven by cronyism

"Since Yanukovych has been in power, we haven't seen a return to state control of the media - at least not yet - but there has been a change in the ownership policy," he added. "You can't have the head of Ukraine's SBU security service running the biggest pro-Yanukovych media outlet, which is what has happened with Valeriy Khoroshkovsky. It also appears that rival owners are being targeted for intimidation and rival channels removed so control is being exerted in different ways."

Graham Stack, a journalist at the Kyiv Post, agrees that ownership maneuvers in the Ukrainian television sector have been disputed and that channels and owners friendly to the president have been favored. But he rejects the idea that intimidation of journalists and owners have been part of the move for control.

"Yanukovych ostensibly tolerates media dissent and criticism," he told Deutsche Welle. "At the same time, however, Inter - the top Ukrainian TV channel - is owned by a political ally, Vladimir Khoroshkovsky, who is also head of Ukraine's security service, the SBU. Obviously Inter gives the Yanukovych administration an easy ride. Moreover, Inter won a lawsuit against the award of additional frequency licences to two independent TV stations, TVi and Fifth Channel, which may restrict some of their broadcasting ability."

"TV journalists have been protesting increasing interference in news production from oligarch owners, but there is no evidence yet of systematic quashing of critical reporting or of use of violence or threats of prosecution to intimidate journalists," Stack added. "This is also unlikely to happen not least because of the international outcry that would result." 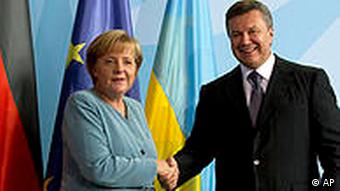 Merkel spoke of her concerns when she met Yanukovych

European leaders, such as German Chancellor Angela Merkel, and other western diplomats have spoken of their concern about the situation with some going as far as to suggest that Ukraine's new government - made up mostly of leaders from the pre-revolution regime - are "instinctively less democratic" than their pro-western predecessors and are now free of the shackles of democracy imposed on them during the Yushchenko years.

However, while rebukes have been issued and words exchanged, most experts don't expect western leaders to pressure Yanukovych too strongly to reform or agitate for a return to a more liberal form of government.

"All this suggests that Ukraine is heading in a worrying direction," Wilson said. "Yanukovych is pushing a kind of authoritarianism-lite at the moment and he's calculating that the Europeans and other leaders will turn a blind eye to it and not interfere because the alternative would be a return to the chaos and in-fighting of the Orange coalition."

"There is no doubt (the Yanukovych regime) have less democratic instincts, but, with sights officially set on future EU membership, and fears of being dominated by Russia, they are well aware they need to retain democracy for international credibility," Graham stark added.

"However, international partners want to see more stability in Ukraine and will tolerate more 'managing' or 'massaging' of democracy, if it facilitates urgently needed structural reforms."

Ukrainian President Viktor Yanukovych faced a tough grilling over press freedom in an interview with the German media before a visit to Berlin on Monday. The president had hoped to focus on economic issues. (30.08.2010)

After years of animosity, relations between Ukraine and Russia are improving significantly. But not everyone is happy with Kyiv's new alignment with Moscow. Western powers are watching the deepening ties with concern. (02.07.2010)

Ukrainian president Viktor Yanukovych has formed a new coalition and appointed a cabinet with ally Mykola Azarov at its head. The events come a week after Yulia Tymoshenko was ousted from her post as Prime Minister. (11.03.2010)