A conscript fired on fellow soldiers, killing five and injuring five others before fleeing. The incident occurred in the eastern Ukrainian city of Dnipro. 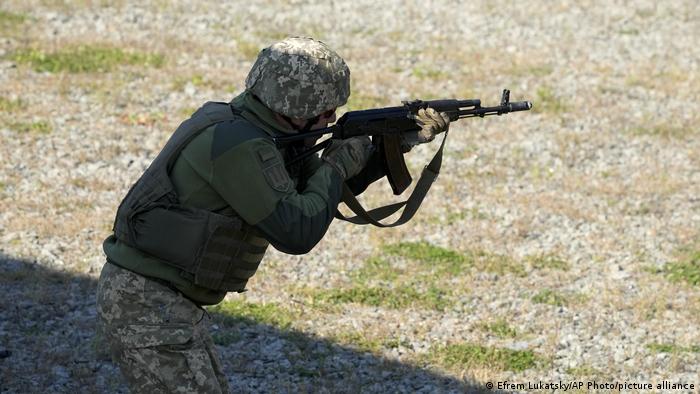 A young conscript allegedly opened fired on fellow soldiers in the eastern Ukrainian city of Dnipro, killing five people and injuring five others on Thursday, police and the interior ministry said.

President Volodymyr Zelenskyy has ordered a probe into the incident. He called the mass shooting "terrible" and offered condolences to the victims' families and friends.

He was captured Thursday morning after going on the run in the town of Pidhorodne some 20 kilometers (12.5 miles) north  of the mass shooting.

The conscript allegedly took an AK47 and ammunition from the armory before shooting at colleagues just before 4 a.m. local time (0200 GMT).

What is known about the shootings?

Ukraine's Interior Ministry wrote on Telegram that the the shootings occurred "on the territory of the Yuzhny Machine-Building Plant Yuzhmash."

"A soldier of the National Guard of Ukraine," who they named as a 20-year-old conscript, was responsible for the incident.

A female soldier was among those who died after succumbing to her injuries, according to the interior ministry.

The shooter was on the run and last spotted near the Rocket and Space College. He was wearing his camouflage uniform and allegedly concealing an AK47 underneath.

Ukraine's State Bureau of Investigation later said the gunman called police and  surrendered in the town of Pidgorodne just north of Dnipro.

The site of the shooting has been sealed off and civilians are being directed away from the scene.