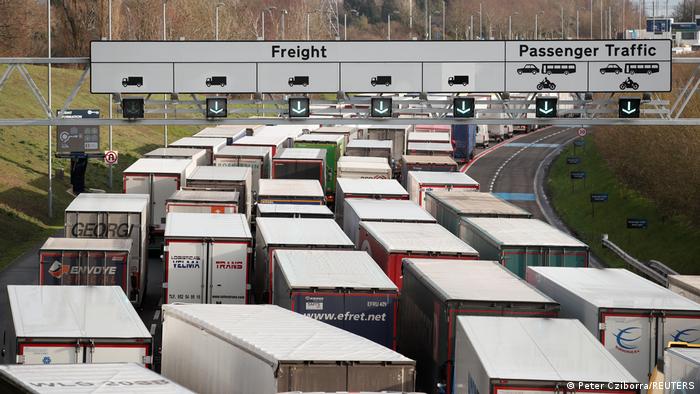 Long lines of trucks stood on motorways into the English port city of Dover and to the nearby Eurotunnel on Friday as companies rushed to transport goods over the border before the UK's final exit from the European Union on December 31, under still uncertain terms.

Trucks were backed up for some 32 kilometers (20 miles) on the motorway leading to the port on Thursday evening, according to a Reuters photographer on the scene.

Britain officially left the EU's political institutions on January 31. Since then, it has been in a transitional period within the bloc's customs union and single market that is scheduled to end at 2300 UTC on December 31. This means that British companies will have to fill out customs declarations and other paperwork to export and import goods in and out of the bloc whether there is a trade deal or not.

The government has warned that if the paperwork is not done correctly, up to 7,000 trucks could back up from Dover. Some businesses have already halted production citing international supply-chain issues.

'Brexit is not synonymous with chaos'

The CEO of the port of Dover, Doug Bannister, told Reuters that some disruption was expected from January 1, but that the port had "a proven track record of being able to clear disruption very effectively and get back to normal operations."

On the other side of the channel, in Calais, France, the port chief voiced similar optimism.

However, the port of Calais, too, has seen increased congestion on its access roads. This is partly owing to stockpiling by British companies but also because some ferries have been cut due to the reduction in passengers amid the coronavirus pandemic.

The conditions under which the UK's final exit will take place have still to be finalized before a Sunday deadline (at least as it stands, several deadlines have come and gone), with a so-called no-deal Brexit still very much in the cards.

British Prime Minister Boris Johnson admitted on Friday that things were "looking difficult" and that there was "a gap that needs to be bridged," though he said that the UK's "door is open." His remarks were echoed by EU chief negotiator Michel Barnier, who told MEPs that there were "just a few hours to work through these negotiations ... if you want this agreement to enter into force on January 1."

"We have to be prepared for all eventualities," he added.

European Commission President Ursula von der Leyen said after talks with Johnson late on Thursday that differences over fishing rights were a major sticking point. Britain wants to decide who can enter its waters to fish after January 1, while the EU is seeking an agreement guaranteeing access to EU fishers.

Johnson has insisted throughout, as he did again on Friday, that the UK will "prosper mightily" even if there is no deal. He did, however, also concede that "it may be difficult at first."

Coronavirus: Austria and Denmark break ranks with EU on vaccines 1h ago

EU, US impose sanctions on Russia over Alexei Navalny poisoning 2h ago